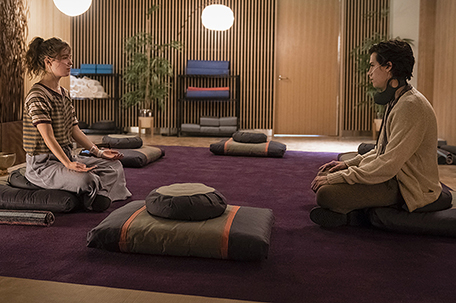 ABOVE PHOTO: From left; Hayley Lu Richardson and Cole Sprouse in “Five Feet Apart” to be released by CBS FILMS and LIONSGATE.

Stella Grant (Haley Lu Richardson) is a typical 17 year-old in most regards. However, she is also suffering from Cystic Fibrosis (CF), a genetic disease which makes her very susceptible to a variety of breathing disorders.

Consequently, she spends much of her time in the hospital receiving a “tune up” for this or that malady. She’s currently receiving treatment for bronchitis on a ward with several fellow CF patients, including her gay BFF, Poe (Moises Arias), although there is a strictly-enforced rule that they stay at least six feet apart at all times, because they could easily infect each other.

That regulation is put to the test upon the arrival of newcomer Will Newman (Cole Sprouse), a CF victim with a bacteria which would prove fatal should Stella catch it from him. For, the two kids fall in love at first sight, so they find it hard to resist their raging hormones’ urge to merge.

Luckily, nurse Barb (Kimberly Hebert Gregory) is there to monitor the movements of the young patients. She has been particularly vigilant to prevent any rendezvous on her watch, ever since an incident that led to a tragic ending.

The movie’s sole flaw rests in its unnecessarily adding a melodramatic twist more appropriate for a soap opera. During the picture’s climactic moment, we suddenly learn that Stella’s prayers for a lung transplant might have miraculously just been answered. A distracting “rabbit-out-the-hat” development that almost ruins an otherwise poignant love story.

To see a trailer for “Five Feet Apart,” visit: https://www.youtube.com/watch?v=XtgCqMZofqM

‘Guerrilla’: a drama of love, revolution set in ‘70s London