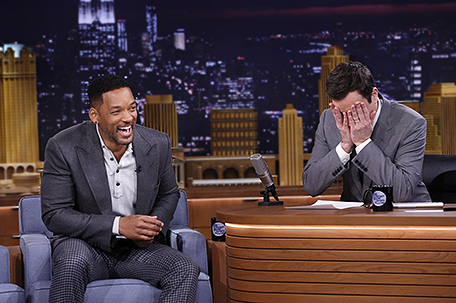 ABOVE PHOTO: Jimmy Fallon appears with Will Smith, left, during his “The Tonight Show” debut on Monday, Feb. 17, 2014, in New York. Fallon departed from the network’s “Late Night” on Feb. 7, 2014, after five years as host, and is now the host of “The Tonight Show,” replacing Jay Leno after 22 years.

NEW YORK — If Jimmy Fallon had already proven he was a natural hosting NBC’s “Late Night,” he left no doubt Monday that “The Tonight Show” now fits him like a glove.

As promised during the much-promoted run-up to his “Tonight Show” debut, Fallon made no drastic changes to the “Late Night” formula that had served him for five years. He remained funny, gracious, bubbly and, above all, comfortable presiding over a show that was different mostly for its earlier time slot, its classier production values and legendary brand name.

“We can book people from the West Coast?!” he joked at his newfound status.

He did pretty well with his bookings on opening night: Will Smith and the rock group U2.

But all that was ahead.

They had seen his filmed opening — Jimmy as the New York nightcrawler — shot by director Spike Lee.

They discovered that his band, the Roots, had grown by two from its already husky eight pieces.

Then out he came, to thunderous applause, and planted himself on his mark (a four-leaf clover) to deliver his first monologue.

“I’m Jimmy Fallon,” he began, and, with a nod to past late-night turbulence that most recently saw his “Tonight” predecessor, Jay Leno, make an unsought exit, he added, “I’ll be your host — for now.”

He expressed gratitude for his new gig, introduced his parents in the studio audience, and dispensed love in every direction — and made it sound authentic.

He had a few Olympics jokes, one offering sympathy to NBC sportscaster Bob Costas, who was sidelined from several days of Olympics coverage with a blinding bout of pinkeye.

“You could tell he was having trouble when he spent half-an-hour interviewing a mop he thought was Shaun White,” Fallon cracked.

Back at his desk, he voiced what seemed like an aside: “To my buddy who said that I’d never be the host of ‘The Tonight Show’ — and you know who you are — you owe me a hundred bucks, buddy.”

With that, Robert De Niro burst through the curtain and plunked a hundred dollars on Fallon’s desk.

But that wasn’t all. In rapid succession, a parade of other celebs circled through right behind him. They included Joe Namath, Rudolph Giuliani, Lindsay Lohan, Lady Gaga, Mike Tyson, Stephen Colbert and Sarah Jessica Parker.

Joan Rivers was also among them, repaying her “debt” and making a bit of history in the bargain: 49 years earlier to the day, the veteran comedian had made her first appearance on “The Tonight Show Starring Johnny Carson” in that very studio, and had not appeared on “Tonight” since 1987, when she was banned by Carson after jumping to Fox to host her own short-lived show.

A key part of the celebratory spirit for Fallon was the fact that, after more than 40 years in Los Angeles, he and NBC have brought “Tonight” back to New York and Rockefeller Plaza, where it has reclaimed Studio 6B, once the home of Carson and, before him, “Tonight” host Jack Paar.

From the observation deck atop the G.E Building he occupies, he introduced U2, who, 70 stories aloft, performed a new song, “Invisible,” against a magnificent New York cityscape at a perfect moment of dusk. The backdrop was so beautiful you might have sworn it was computer generated, but it was real, as was the bitter cold that had the musicians, and a legion of fans gathered round, clad in heavy winter wear.

But after a commercial break, Fallon and his musical guests were cozy, back in the studio, where U2, seated on the powder-blue couch, performed an acoustic version of their Oscar-nominated song, “Ordinary Love.”

It was a fine ending to a much-assured hour.

“I just want to do the best I can and take care of this show for a while,” Fallon told viewers. “If you guys let me stick around long enough, maybe I’ll get the hang of it.”

No worries. For five years on “Late Night” he was getting the hang of it.