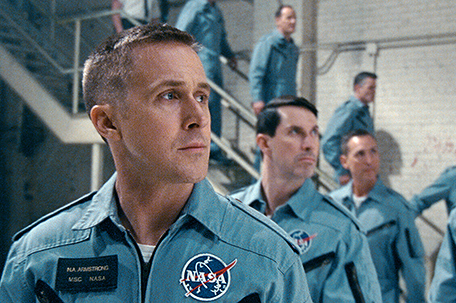 Neil Armstrong made history on July 20, 1969 when he became the first person to walk on the moon. In retrospect, the NASA astronaut proved to be the ideal pick for the honor, since he never subsequently sought to cash in on his celebrity status.

Instead, the reluctant hero modestly eschewed fame and fortune, withdrawing from the limelight in favor of sharing his pearls of wisdom with future generations in the classroom as a college professor. He even discouraged biographers until he finally agreed to cooperate with James R. Hansen on “First Man: The Life of Neil A. Armstrong.”

Published in 2005, the 768-page opus has now been adapted to the screen by Oscar-winning scriptwriter Josh Singer (for “Spotlight”). However, the biopic covers only 1961 through 1969, Armstrong’s early years in the space program, ending with Apollo 11’s historic lunar landing.

The picture reunites Damien Chazelle and Ryan Gosling whose collaboration on the delightful musical “La La Land” (2016) netted an Academy Award for Best Director and the latter a nomination in the Lead Actor category. “First Man” is a relatively-sober affair which divides its time between chronicling the astronauts’ perilous training regimen and speculating about the ever-stoic Armstrong’s inscrutable psyche.

The movie’s somber tone is set not long past the point of departure when Neil and wife Janet’s (Claire Foy) 2 year-old daughter Karen loses her battle with brain cancer. In lieu of mourning, he throws himself into his preparations for space flight, and his emotional unavailability puts an unspoken strain on their relationship.

Meanwhile, the risks associated with the Gemini and Apollo programs only further intensify Armstrong’s palpable angst. After all, numerous astronauts died in accidents during training, including his close friends Ed White (Jason Clarke) and Elliot See (Patrick Fugit).

In terms of special effects, “First Man” tends to telescope tightly on what transpired in the cockpits, so brace yourself for lots of hand-held camera work from the astronauts’ point-of-view, as opposed to the awe-inspiring “God shots” you ultimately get from the lunar surface.

A fitting tribute to an American icon best remembered as a humble, vulnerable soul with human frailties.

To see a trailer for “First Man,” visit: https://www.youtube.com/watch?v=PSoRx87OO6k