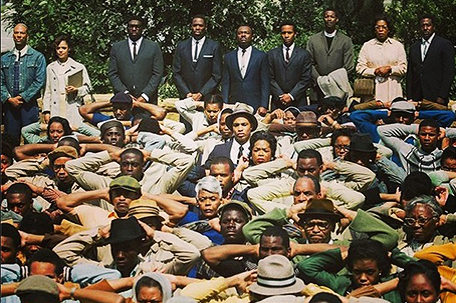 First-look photos from Ava DuVernay’s Selma, shared on her Instagram page, with the poignant caption that reads: “This shot in particular makes me think of both the striking parallels and the chasm of difference between what’s happening in Ferguson today and what happened in Selma almost 50 years ago. The violence against and the diminishment of the black community is the same. The focused, strategic, organized response by black citizens is the difference. This is not a criticism of anything that the citizens of Ferguson have done or not done to date. Just a reminder that there are PROVEN TACTICS in the struggle for our rights that have produced results. That there are pearls of wisdom in the warrior history of people of color in this country. And that our ancestors and elders want us to remember always and replicate as needed.”

Paramount Pictures has set a Christmas day initial limited release date for, followed by a nationwide theatrical expansion on January 9, 2015.

The early limited roll-out suggests an Oscar-qualifying run for the film, which shouldn’t be a surprise, given the material, and the talent involved, both in front of and behind the camera.