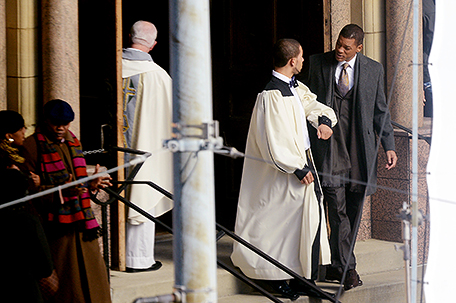 ABOVE PHOTO:  Will Smith during filming  of “Concussion.”

Adewale Akinnuoye-Agbaje, Gugu Mbatha-Raw, Alec Baldwin, Bitsie Tulloch, and Albert Brooks all join Will Smith in the yet-to-be titled drama on concussions in the NFL, which is based on the GQ article “Game Brain,” written by Jeanne Marie Laskas, and which follows Dr. Bennet Omalu, the forensic neuropathologist, who single-handedly made the first discovery of CTE (Chronic Traumatic Encephalopathy) in a pro football player, raising public awareness for the degenerative disease.

The article tells a whistle-blower tale, humanizing the price paid by professional athletes in impact sports, and the political, cultural and corporate interests that fuel the business of professional sports.

Ridley Scott’s Scott Free production shingle and Sony Pictures are backing the project, which will of course star Will Smith as Dr. Omalu, under the direction of Peter Landesman, who will also pen the script.

The project joins other upcoming films on CTE in development, including “Game Time Decision” – Matthew Cherry’s drama which attracted the acting talents of Isaiah Washington, who will star as a retired football player suffering from the effects of concussions sustained during his professional career, as he tries to reconnect with his estranged family, notably a son following in his father’s footsteps, in danger of a similar kind of future.

The Will Smith movie started shooting in Pittsburgh last week and will be filming here through mid-January. And courtesy of the Pittsburgh Post-Gazette, within this post are a few images from the set, taken by photographer Nate Guidry. They were taken at Church of St. Benedict the Moor in the Hill District.

Oscar has eluded Will Smith, despite two nominations within a five year period. Playing what will likely be a meaty role in Dr Omalu, in what will also probably be a weighty, dramatic, hopefully finely-crafted Scott Free-produced project, tackling a very topical subject, just might mean a third.