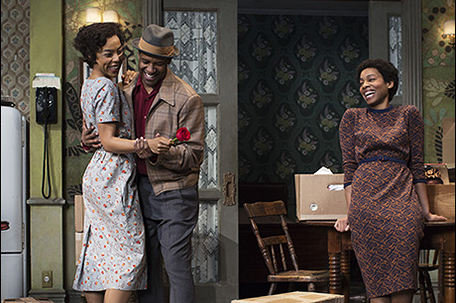 ABOVE PHOTO:  Sophie Okenado, Denzel Washington and Anika Noni Rose in a scene from “A Raisin In The Sun.”

Producers have set opening night for April 23, 2014 at the Barrymore Theatre for the 2014 Broadway revival of Lorraine Hansberry’s “A Raisin in the Sun,” which is directed by Kenny Leon.

Previews began on March 8. The show will run for 14 weeks.

Denzel Washington stars as Walter Lee Younger, with Sophie Okenedo as his wife, Ruth, and Anika Noni Rose as his sister Beneatha.

Diahann Carroll was to play the family matriarch, Lena (“Mama”), but the veteran actress dropped out of the show, saying that the rigorous demands of the rehearsal and performance schedule, would be a bit much for the 78-year-old actress.

In her place, LaTanya Richardson Jackson (who also happens to be wife of Samuel L. Jackson, and a veteran stage and screen actress in her own right), stepped in to play Lena in the upcoming revival.

A Raisin in the Sun was last on Broadway in 2004, with Sean Combs playing Walter Lee Younger, Audra McDonald as his wife Ruth Younger, Phylicia Rashad as mama Lena Younger, and Sanaa Lathan as Beneatha, and was also directed by Kenny Leon.

The show is now in previews with an April 23 official opening set for a 14-week run.

The Tatum Talks: Dear Broadway, ‘A Raisin in the Sun’ has shriveled up