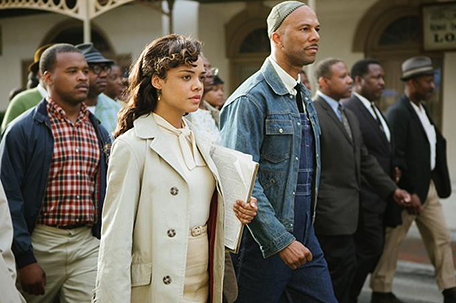 Above is a first-look photo at Common and Tessa Thompson in Ava DuVernay’s “Selma” – a film that’s already generating Oscar buzz ahead of its December premiere.

Rapper/actor Common plays James Bevel, the civil rights activist who helped set up 1963’s “Children’s Crusade” in Birmingham, Alabama, which was a turning point in the Civil Rights Movement.

Thompson is Diane Nash, a founding member of the Student Nonviolent Coordinating Committee (SNCC) in April 1960, who also played a key role in bringing King to Montgomery, Alabama, in support of the Freedom Riders. She was sentenced to two years in prison for teaching nonviolent tactics to children in Jackson, Mississippi, although she was four months pregnant. She was later released on appeal. Nash also played a major role in the Birmingham desegregation campaign of 1963 and the Selma Voting Rights Campaign of 1965.

Both Common and Thompson join star David Oyelowo as Martin Luther King Jr., Carmen Ejogo as Coretta Scott King, Tom Wilkinson as President Lyndon B. Johnson, and others, in a film produced by Oprah Winfrey, Brad Pitt’s Plan B and Christian Colson (who won an Oscar for producing “Slumdog Millionaire”).

The Paramount Pictures, Pathe UK-backed project centers on the 1965 landmark voting rights campaign regarded as the peak of the civil rights movement.

A Christmas Day initial limited release date for, which will be followed by a nationwide theatrical expansion on January 9, 2015.

With December just around the corner, a first trailer should surface any day now.