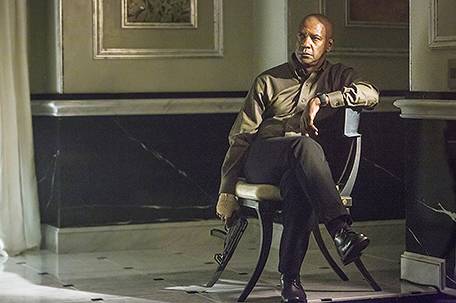 Sony Pictures has just released the first image of Denzel Washington (above photo) in next year’s action thriller The Equalizer.

Based on the popular 1980’s CBS series (which was a real favorite of mine back then) and starring the late British actor Edward Woodward as the Equalizer, in the film Washington plays “a solitary, monastic figure who hates injustice and devotes himself to helping people who are being victimized. With a no-nonsense attitude, compassion and experience with dealing with a wide variety of situations he’s a powerful and useful detective.

That is, according to the official press release accompanying the image. Hopefully the film will solve the problem I always had with the show explaining just how in the hell did the Equalizer always manage to arrive just in nick of time to save somebody’s life despite New York City traffic?

The film marks for first reteaming of Washington and his Training Day director Antoine Fuqua and is scheduled to come out until late 2014 on September 26.

As you may recall a few other directors were originally attached to the film before Fuqua came on board including Drive director Nicolas Winding Refn and Rise of the Planet of the Apes director Rupert Wyatt.

In fact Refn got some attention after he left the project telling an interviewer for the Los Angeles Times, regarding the project, that he would “rather make a good movie that breaks even than a bad movie that makes money…Let’s put it like this: There’s a reason why I pulled out.”

Hopefully the film will be much better than that.