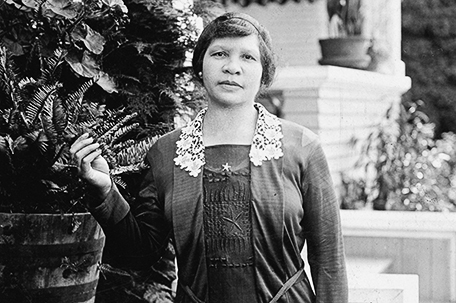 The groundbreaking journalist and civil rights activist who ran in 1952 on the Progressive Party ticket is the subject of a new PBS/WNET “American Masters” short. The 12-minute film is the final installment of a series focusing on 26 American women from 1890 to 1920, like Mexican American journalist Jovita Idar and Tye Leung Schulze, the first Chinese American woman to vote in the U.S.

Born in 1888 in Little Compton, Rhode Island (others have said she was born in Sumter, South Carolina), Bass rose to become publisher and owner of The California Eagle in 1912 following the death of the newspaper’s founder, John James Neimore. The Eagle served as Southern California’s Black newspaper and it pushed for civil rights while covering the community of Black migrants from Texas.

With her husband, Joseph Bass, as editor, the paper took on police brutality, the Klu Klux Klan, and D.W. Griffith’s racist film, “Birth of A Nation.”

Filmmakers Charlotte Mangin and Sandra Rattley said they wanted to introduce Bass to a new generation since many people do not know her story.

Mangin went through her archives in Southern California and discovered the original ballot where her name is listed during the 1952 presidential election. “I found her memoirs, which she wrote in the third person,” Mangin said. “Her life spans such an incredible century of change in American history. She’s constantly reinventing herself but always with the same message of social justice.”

Rattley said knowing the story of Bass can put into perspective what the U.S. is seeing today around women’s equity. “Kamala Harris did not drop from the sky,” Rattley said. “She is part of a legacy of women who proceeded her.”

Nikole Hannah-Jones, a Pulitzer Prize-winning reporter who spearheaded the 1619 Project on slavery for The New York Times Magazine, is among those interviewed in the film. Hannah-Jones said she became familiar with Bass during graduate school as she was examining the role of the Black press. The publisher’s fearless tone and unapologetic voice immediately grabbed Hannah-Jones.

“I see myself as part of a long tradition of Black women who refuse to engage in respectability politics, who refuse to be told how to engage,” Hannah-Jones said. “If she were living today and on Twitter, she would not suffer fools. She would speak out as she did in print…and she would suffer for it.”

The short is scheduled to be released on Wednesday, which falls on Women’s Equality Day. It will be available for free on the American Masters website.