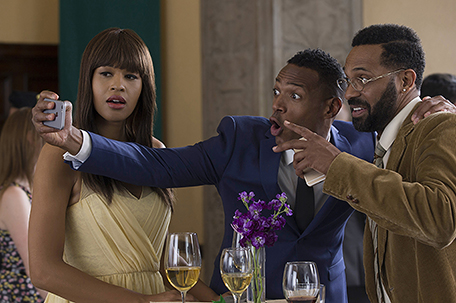 Ever since Scary Movie (2000), Marlon Wayans has carved out quite a career for himself writing and starring in a string of silly spoofs that includes Scary Movie 2 (2001), Dance Flick (2009), A Haunted House (2013), and A Haunted House 2 (2014). The latest offering in his cottage industry of genre-bending parodies is Fifty Shades of Black, a jaw-dropping lampoon of the already outrageous Fifty Shades of Grey.

This relatively-kinky variation on the theme remains fairly faithful to the source material’s basic plotline, so it helps immeasurably if you’ve seen the original. The major difference, however, is that the two leads are African American, and much of the humor revolves around graphic nudity and stale racial stereotypes.

At the point of departure, we’re introduced to Hannah (Kali Hawk), a Literature major at mythical Howell University. Since her promiscuous, foul-mouthed roommate, Kateesha (Jenny Zigrino), has a crippling case of Chlamydia, Hannah finds herself recruited as a stand-in to interview filthy-rich Christian Black (Wayans).

She asks “How did you get your money and can I have some?” His answer: “Drug dealing, like most successful blacks.” And “Is you gay?” is met with “You’re only gay if you enjoy touching penises.”

After that dubious exchange, Christian tricks the naive virgin into unprotected intercourse despite the fact that she’s ovulating. That disturbing date rape scene is a little hard to laugh at, especially in light of the recent Bill Cosby revelations.

Furthermore, when Hannah ends up pregnant, she takes him home to meet her misogynistic step-father, Ron (Mike Epps). Instead of protecting his daughter’s honor, he sides with Christian’s refusal to marry her, saying “I like this N-word,” before denigrating Hannah’s mother as a slut.

In other skits, Christian waterboards Hannah (while shouting “Where’s bin Laden?”), delivers an insulting commencement address at Howell (“Thank God, I’m not you!”) and tosses his poop-filled underwear in the face of a screaming fan during a gross homage to Magic Mike. Still, the movie’s most tasteless moments arrive on those occasions when Christian gratuitously exposes his genitalia.

A descent into depravity far more shocking than funny that’s morally-objectionable in part for all.

To see a trailer for Fifty Shades of Black, visit: https://www.youtube.com/watch?v=vZBPoakMk_o