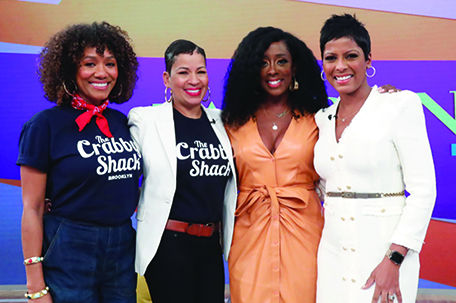 Philadelphia native FiFi Bell-Clanton originally began her career in fashion. As a fashion stylist to the stars, Bell-Clanton was very successful. Despite her success, she desperately wanted a change. With no prior experience in the food industry, Bell-Clanton and her friend and co-owner Gwen Woods opened “The Crabby Shack” in Brooklyn, New York, on her 40th birthday.

“The Crabby Shack” has been a staple in Brooklyn since 2012, bringing a little taste of the sea to the east coast. Bell-Clanton sat down with The Philadelphia Sunday SUN  to talk about life as a Black woman in business.

Prior to jumping head-first into entrepreneurship as a restaurant owner, Bell-Clanton was making waves as a fashion stylist to Wyclef Jean, Alicia Keys and Disney’s Cheetah Girls. A desire for a change of pace was the catalyst for taking her life in a completely new direction.

Long before the inception of The Crabby Shack, Bell-Clanton knew that she would own a business someday.

“One of my biggest financial clients was Disney and The Cheetah Girls,” she said. “When I got my check from them, I said ‘oh my God… am I ever going to see another check this big?’ Then I said, ‘this is what I’m going to use when I open my business.’ I didn’t know what that business was just yet, but I knew that I wanted to do something.”

After testing the waters with a few business ventures which included jewelry and a clothing line for dogs, Bell-Clanton had a conversation with her good friend and now co-owner of The Crabby Shack Gwen Woods.

“I talked to Gwen and I was trying to think of what I love… I love crabs,” she said. “I always was the one that made it for everybody. One time my friends and I went on a ski trip. Instead of making crab legs, I deshelled all of the meat out of the crabs. I made my own garlic butter sauce that was super yummy and when they got home, I asked them to try it. Once they ate it, they said ‘you’re on to something, you really need to do this.’”

About six months later, Bell-Clanton and Woods opened The Crabby Shack in Brooklyn. With gentrification on the rise, especially in highly sought-after areas like Brooklyn, Bell-Clanton shared her experience as a business owner.

“To have a business in Brooklyn first and foremost is a blessing,” she exclaimed. “But it has been hard to see a lot of the Black owned businesses close. It’s been even more difficult having to see them go, when you’ve become friends and they’ve welcomed you into the community. I feel really blessed that we’ve been able to sustain. We’re working hard, it’s not easy… gentrification has definitely made it harder. You have to make an effort to shop Black and we make sure that we support. You have to take notice of those things to help our community continue to thrive.”

Bell-Clanton credits The Crabby Shack’s sustainability largely to the quality of the food and customer service.

“It’s like you’re being transported to a seaside destination; Nantucket in the middle of the concrete jungle,” Bell-Clanton explained. “It’s a nice, warm feeling, with great vibes and delicious food. We pride ourselves on our customer service. You’re going to get sent home happy and you’re going to come back!”

In addition to its quality customer service and beautiful aesthetic, The Crabby Shack is best known for its Clobster roll — a combination of a half crab, half lobster roll.

“It’s something we did based on our customers. Our customers kept coming up to the register asking ‘should I get a crab roll or a lobster roll?’ Now, it’s one of our best sellers because they get the best of both worlds.”

The customers aren’t the only ones taking notice of The Crabby Shack. It was featured in Renae Bluitt’s Netflix documentary “She Did That,” which highlights Black female entrepreneurs.

“It showcases not only our hardships, but our strengths and what it took to get there,” Bell-Clanton said.

Tamron Hall has also taken notice of the hard work, dedication and the unrelenting perseverance of Bell-Clanton and Woods. The dynamic duo will be featured on The Tamron Hall Show on Wednesday, February 26, 2020 on ABC during an episode celebrating female entrepreneurs.

“I was so happy to be a part of the Tamron Hall Show, it was an honor. Being in her presence, on her platform, just shows me that we are getting there… slowly but surely!”

Lovers of delicious seafood that are not residents or frequent visitors of NYC can look forward to The Crabby Shack shipping their food nationally at the end of March. Five to six items will be available with the option of 24 hours or two-day mail. The items of your choice will come frozen, seasoned, packaged with instructions on how to prepare.

Patrick Clanton rocks out in ‘School of Rock’