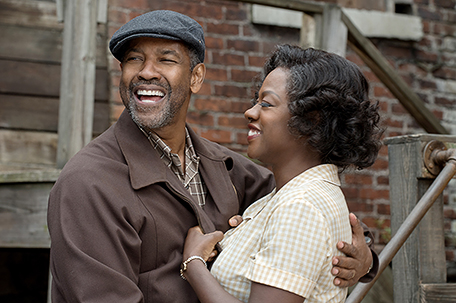 Back in 1987, Fences won both the Pulitzer Prize for Drama and the Tony Award for Best Play. The August Wilson classic, set in the Pittsburgh in the 50s, chronicled the day-to-day struggle of a blue-collar, African-American family. The production was brought back to Broadway in 2010, and it landed the Tony for Best Revival in addition to ones for Denzel Washington and Viola Davis in the Best Actor and Best Actress categories.

Directed by Washington, the big screen version reunites him with Davis and most of the rest of the principal cast, including Davis, Mykelti Williamson, Stephen Henderson and Russell Hornsby. The faithful adaptation of the Wilson masterpiece doesn’t attempt to amplify the original beyond a few tweaks made in service of the cinematic medium.

The story revolves around the unenviable trials and tribulations of Troy (Washington), a 53 year-old garbage man who aspires to someday being promoted to truck driver. Trouble is, he’s “colored,” and that relatively-lofty position has, to date, been strictly reserved for whites. So, Troy and his BFF/co-worker Bono (Stephen Henderson) have to settle for grumbling about the racism that has kept them at the bottom of the totem pole.

Now Troy didn’t always have such modest dreams. In his youth, he’d exhibited promise as a baseball player. However, his hope of turning pro disappeared in a flash the day he was sent up the river for committing a murder. He did still try out for the major leagues when he was paroled at 40, but that belated attempt proved to be little more than an exercise in futility.

As a result, Troy tends to soak his woes in alcohol, drinking hard liquor straight from the bottle. This doesn’t sit well with his long-suffering wife, Rose (Davis), who is understandably worried her man might drink himself to death. The picture’s other pivotal characters include the couple’s teenage son (Jovan Adepo), Troy’s trifling adult son (Hornsby) from his first marriage, and Troy’s mentally-challenged brother, Gabe (Williamson), a wounded World War II vet left with a metal plate in his head.

The plot thickens when Troy informs Rose that he not only has a mistress but has knocked her up, to boot. Will this be the proverbial last straw that finally breaks the back of their shaky relationship? After all, putting up with an underachieving alcoholic is one thing, a flagrant philander, quite another.

Refreshing familiar roles which are obviously second nature to them, Denzel and Viola deliver emotionally-provocative performances likely to garner Academy Award nominations in Oscar season. A poignant period piece painting a plausible picture of black life in the inner city prior to the advent of the Civil Rights Movement.