The “Fate of the Furious” — Luminous Ludacris! 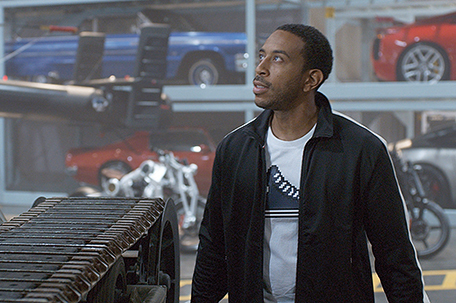 ABOVE PHOTO:  Chris “Ludacris” Bridges as Tej in “The Fate of the Furious.”

The multi-talented Chris “Ludacris” Bridges has enjoyed a remarkable career. As a recording artist, Bridges has sold more than 15 million albums domestically, thanks to the blockbuster success of such singles as “Stand Up,” “Get Back,” “Southern Hospitality,” “Number One Spot,” “Money Maker” and “My Chick Bad.”

All of these records were accompanied by ingenious videos that demonstrated Luda’s far-reaching imagination and his willingness to stretch the boundaries of what rap videos could look and feel like. Blessed with an unrivaled mix of lyrical acumen, wit and imagery, he has solidified himself as one of music’s premiere entertainers.

Though best known for his infectious tunes, Ludacris has proven himself equally adept at composing powerful songs with serious subject matter, such as the hit “Runaway Love.” Furthermore, his versatility and artistic complexity enabled him to make a seamless transition to acting.

On screen, he most recently co-starred in “Furious 7,” a follow-up to his stellar work in the Fast and Furious franchise’s “2 Fast 2 Furious,” “Fast Five” and “Fast & Furious.” He was a member of the A-list ensemble assembled for the romantic comedies “New Year’s Eve” and “No Strings Attached.”

Luda also delivered critically-acclaimed performances in “Hustle & Flow” and the Academy Award-winning Best Picture, “Crash,” as well as on such television series as “Empire” and “Law & Order: Special Victims Unit.” Plus, since stepping back into the studio, he’s been wowing music fans with his 8th studio album, “Ludaversal.”

The consummate businessman, Luda’s latest venture includes the highly-anticipated Chicken-n-Beer restaurant coming soon to the Hartsfield-Jackson Atlanta International Airport. In addition, he is dipping his hands in the tech space by partnering with apps such as Roadie, an on-the-way delivery service.

Luda’s philanthropic efforts rival his entertainment accomplishments. He partnered with Crash writer/director Paul Haggis and Artists for Peace and Justice to help raise more than $4 million for Haitian relief efforts. And he’s raised more than $100,000 for Atlanta flood victims through The Ludacris Foundation, too. Having partnered with Jane Fonda, Bill Gates, Richard Branson and Nelson Mandela, to name a few, the foundation continues to inspire youth through education.

Here, Luda talks about reprising the role of Tej Parker in “The Fate of the Furious” opposite Vin Diesel, Dwayne Johnson, Michelle Rodriguez, Jason Statham, Charlize Theron and Tyrese. 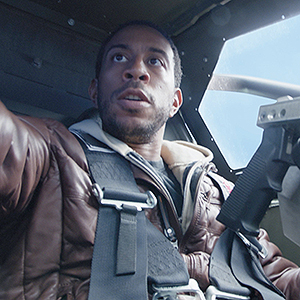 Kam Williams: Hi Luda, thanks for another interview.

KW: I really loved this film!

KW: “Furious 7” left me in tears, given the sensitive way they handled Paul Walker’s exit. So, that left me wondering whether they’d be able to get back to the action following such a moving conclusion. But they handled the transition seamlessly and very tastefully. It works perfectly.

L: It does, Kam. And I feel like this is the most clever of all of them. It’s really smart. If you see it twice, you’ll notice a lot of things you missed the first time. I’m just happy that we continue to outdo ourselves, man, because, at this point, it’s like, “How are we doing this?” There’s definitely a higher power controlling the franchise.

L: It’s very emotional. That’s a void that will never be filled. All we can do is carry on his legacy by making the best movie possible. That adds a little pressure on us.

KW: But you did manage to outdo yourselves. Other than James Bond and some of the comic book adaptations, I can’t think of another franchise with such staying power.

L: Exactly! That’s what we like to do… break records!

KW: How do you explain the series’ enduring appeal?

L: I think maybe our really being a family off-screen might have a lot to do with the chemistry you see on-screen.

KW: What’s new about your character, Tej, this go-round?

L: Tej Parker’s happy because he got himself a tank provided by the U.S. government. And you also get to see some skills that you never knew he had. I just love how he continues to grow along with the entire franchise. That makes it so special.

KW: You have some excellent lines in this episode, and so does Tyrese. The film also features some great banter between Dwayne Johnson and Jason Statham’s characters. And Charlize Theron was a terrific villain.

L: I think Charlize’s addition is one of the picture’s greatest qualities. While women were already fans of the franchise, her performance literally taken it up another notch, because she brings her own fan base.

KW: She disappeared into the role so well, I didn’t even know it was Charlize for at least 10 minutes after she made her first appearance.

L: Dude, that’s what I’m trying to tell you. She’s so good at what she does that she make Vin and everybody else around her better. We just continue to up the ante.

KW: You know what was hilarious? How Clint Eastwood’s son, Scott, is in the film, but playing a nerd instead of a macho character you’d expect.

L: We always like flipping the script a little and doing the unexpected which is why it’s so successful. 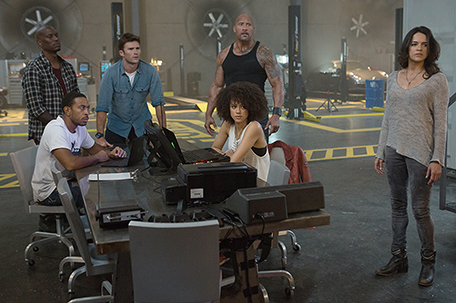 KW: In my review, I said this film is worth the price of admission for the opening scene alone, like “Taken,” “District B-13” and the remake of “Dawn of the Dead.” That drag race was breathtaking and kept me on the edge of your seat.

L: Exactly, Kam! And it moves from one action sequence to the next without ever losing the integrity or continuity of the storyline.

KW: What’s going on with you musically, Luda?

L: Everything’s good! I’m getting back into the bloodstream of music. I just dropped a single called Vitamin D. Everybody’s talking about the video. You definitely need to check it out. There’s this whole hoopla about this CGI (computer-generated) chest and abs I have in it.

KW: Tell me a little about your upcoming projects.

L: I have an independent film called “Ride” coming out, and I do some voiceover work in a movie called “Show Dogs.” Besides that, on TV, they’re bringing back the show “Fear Factor” with me as the host.

KW: Congratulations! Harriet Pakula-Teweles asks: With so many classic films being redone, is there a remake you’d like to star in?

L: If Halle Berry does a remake of “Monster’s Ball,” I’d like to play Billy Bob Thornton’s character.

L: My earliest childhood memory? That’s a good question, Kam. Just going out to the park with my mom, and playing on the slides and the swings.

L: I grew up Christian, if that’s what you’re asking. I prefer not to get into discussions of religion these days. But I’m very much a believer in a higher power.

L: If I could have one wish instantly granted, I would probably ask for world peace.

L: Wow! That’s such a good question. I really have to think about that… I wish somebody would ask me if I could cook, and I’d tell them, “Hell no!”

L: The Predator, because he had dreadlocks. I felt like he was Jamaican.

KW: Susan Doran asks: How did you come up with the name Ludacris? I figure that the “cris” part comes from Chris being your real first name.

L: That’s exactly right. Since my music embodied the dictionary definition of “ludicrous,” I think it was kind of creative to combine it with my name and come up with “Ludacris.”

KW: Thanks again for the time, Luda, and best of luck with the film, the new single and the new TV show.

To see a trailer for The Fate of the Furious, visit: https://www.youtube.com/watch?v=JwMKRevYa_M