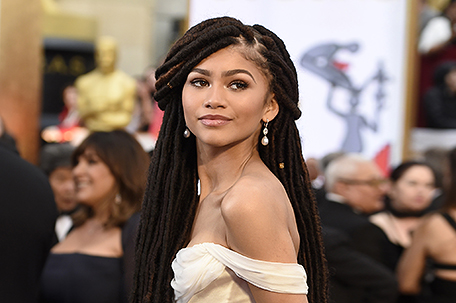 ABOVE PHOTO:  Zendaya arrives at the Oscars on Sunday, Feb. 22, 2015, at the Dolby Theatre in Los Angeles. (Photo by Chris Pizzello/Invision/AP)

LOS ANGELES — Giuliana Rancic apologized to Zendaya and others offended by Rancic’s “Fashion Police” jab at the actress-singer’s Oscar-night dreadlocks.

On “E! News” Tuesday, Rancic said the reaction to her comments has increased her awareness of, in her words, “cliches and stereotypes.”

They are damaging, she said, adding that she and others have the responsibility to avoid perpetuating them.

During Monday’s “Fashion Police” on the E! channel, Rancic said that Zendaya’s hair suggested the smell of patchouli oil or marijuana.

Her “E! News” remarks went beyond an apology tweet in which Rancic said her references had nothing to do with race.

In the Instagram post shown above, the 18-year-old Zendaya called Rancic’s “Fashion Police” comment about her dreadlocks “outrageously offensive.”  Before Rancic’s extended apology, as reported by “The Wrap, Fashion Police” co-host Kelly Osborne was reportedly so upset at the comment, she threatened to quit “Fashion Police” over Rancic‘s comment. By Thursday, Ozzy Osbourne’s daughter was singing a different tune: one of the “this too shall pass” variety — a hashtag she implemented in praising both fellow females.

“It takes a strong women to apologize & makes a forgiving women even stronger! #ThisTooShallPass,” Osbourne wrote. 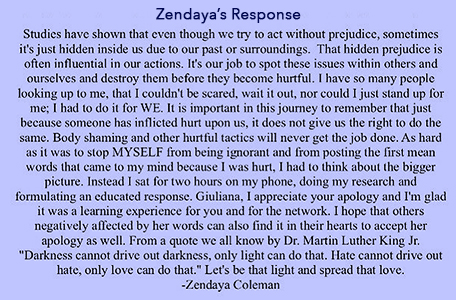 Zendaya Coleman ‘Shakes it up’