EXPLAINER: Drag queens and how they got pulled into politics 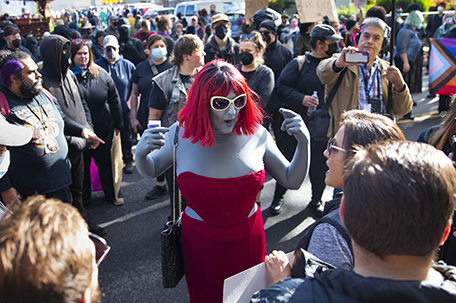 ABOVE PHOTO: Drag performer Emma Lavin, center, attempts to find middle ground with protesters against a drag queen story time outside Old Nick’s Pub in Eugene, Ore., Sunday, Oct. 23, 2022. The art and entertainment form of drag has been miscast in recent months by right-wing activists and politicians who complain about the “sexualization” or “grooming” of children. The recent headlines about disruptions of drag events and their portrayal as sexual and harmful to children can obscure the intent of the art form and its rich history. (Chris Pietsch/The Register-Guard via AP, File)

Lately, drag has been dragged through the mud.

The art form has been cast in a false light in recent months by right-wing activists and politicians who complain about the “sexualization” or “grooming” of children. Opponents often coordinate protests at drag events that feature or cater to children, sometimes showing up with guns. Some politicians have proposed banning children from drag events and even criminally charging parents who take their kids to one.

Performers and organizers of events, such as story hours in which colorfully clad drag queens read books to children, say the protesters are the ones terrorizing and harming children and making them political pawns — just as they’ve done in other campaigns around bathroom access and educational materials.

The recent headlines about disruptions of drag events and their portrayal as sexual and harmful to children can obscure the art form and its rich history.

Drag is the art of dressing and acting exaggeratedly as another gender, usually for entertainment such as comedy, singing, dancing, lip-syncing, or all of the above.

Drag may trace its roots to the age of William Shakespeare, when female roles were performed by men. The origin of the term is debated, but one possibility is that it was coined after someone noticed the dresses or petticoats that male actors wore onstage would drag along the floor. Another casts it as an acronym — an unproven notion that notes in scripts would use “DRAG” to indicate the actor should “dress as a girl.”

Drag performances could later be seen on the vaudeville circuit and during the Harlem Renaissance. They became a mainstay at gay bars throughout the 20th century and remain so.

RuPaul took things a step further with his reality-competition show “RuPaul’s Drag Race,” which became an award-winning hit and allowed drag to explode in popularity — and into the mainstream.

Many drag opponents cite nudity in their objections. Every performer makes different choices, but drag queens often wear more, not less, clothing than you’d see on a typical American woman of the 21st century, at a public beach or on network TV.

Their costumes tend toward extravagant, sometimes floor-length gowns. Drag queens may use false breasts, wear sheer costumes, and use makeup or other means to show cleavage and appear exaggeratedly feminine.

The difference, performers note, is that opponents of drag see sexual deviance in the cross-dressing aspect.

Drag does not typically involve nudity or stripping, which are more common in burlesque, a separate form of entertainment. Explicitly sexual and profane language is common in performances meant for adult audiences. Such routines can consist of stand-up comedy that may be raunchy — or may pale in comparison with some mainstream comedians.

SHOULD CHILDREN SEE OR DRESS IN DRAG?

It’s up to parents and guardians to decide that, just as they decide whether their children should be exposed to or participate in certain music, television, movies, beauty pageants, concerts or other forms of entertainment, parenting experts say.

Performances in nightclubs and brunches meant for adults may not be suitable for children, while other events, such as drag story hours, are tailored for children, and therefore contain milder language and dress.

Drag performers and the venues that book them generally either don’t allow children if a performance has risqué content, or else require children to be accompanied by a parent or guardian — basically, how R-rated movies are handled by theaters.

Drag story hours, in which performers read to children in libraries, bookstores or other venues, have become popular in recent years. The events use a captivating character to get their child’s attention — any parent whose kid can’t take their eyes off Elsa from “Frozen” gets the idea. The difference here is that the goal is to get kids interested in reading.

Some children have performed drag at age-appropriate events. One 11-year-old who dons a princess dress and tiara was scheduled recently to perform at a story and singing event at an Oregon pub — but was downgraded to “guest of honor” after protests outside broke out into fighting.

“Part of keeping our children safe is allowing them to be children, to be playful, to take risks, and to be silly, without it necessarily meaning anything deeper or more permanent,” says Amber Trueblood, a family therapist. “Many parents are OK with children dressing as assassins, evil villains or grim reapers, yet they seldom take the costume choice to mean anything more than playful and fun.”

Opponents of drag story hours and other drag events for audiences of children often claim they “groom” children, implying attempts to sexually abuse them or somehow influence their sexual orientation or gender identity.

The term “grooming” in a sexual sense describes how child molesters entrap and abuse their victims. Its use by opponents of drag, as well as by protesters in other realms of LGBTQ opposition, seeks to falsely equate it with pedophilia and other forms of child abuse.

Perpetrators of the false rhetoric can then cast themselves as saviors of children and try to frame anyone who disagrees — a political opponent, for example — as taking the side of child abusers.

The objections are often religious in nature, with some opponents citing the devil at work. Threats to drag events, and story hours in particular, have increased along with the rhetoric. In addition to the protest in Oregon that failed to suppress one such event, organizers of a recent one in Florida did cancel theirs after what they said were threats from hate groups.

The threats are likely an attempt to scare parents into not taking their children to such events, leading them to fizzle out and push drag back into the closet, observers say. Some organizers, parents and performers have dug in their heels, insisting they won’t cave.

In another tactic to discourage attendance, drag opponents have been known to attend performances, take and post a video that lacks context, and then troll or “dox” the performer or venue.

One such video clip showed a profane drag act in front of a young child and framed it as abuse — though the child was with adults and the venue had advised attendees about coarse content, suggested parental discretion, and required any children to be accompanied by parents.

Other undermining efforts include a false claim that a performer flashed children at a Minnesota library and another false claim that the head of the Drag Queen Story Hour organization was arrested for child pornography.

Despite some opponents’ claims, drag cannot “turn” a child gay or transgender, although its playful use of gender may be reassuring to kids who are already questioning their identity. That way, therapist Joe Kort wrote in a blog post in Psychology Today, gender-nonconforming kids can have “other templates as they begin to sort out their feelings about who they authentically are.”