Exhibition at the Philadelphia Museum of Art: Horace Pippin: From War to Peace 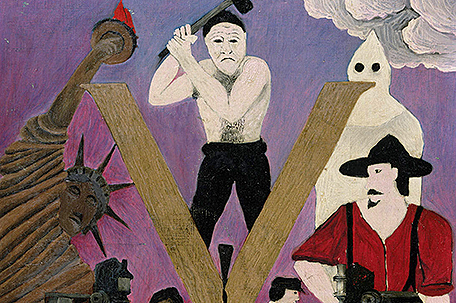 During World War I, Horace Pippin (1988–1946) served in the 369th Infantry Regiment, a division of African American soldiers. Stationed on the front line, Pippin’s battalion was one of four African American regiments to see combat. Pippin, who was shot in the right arm, was one of many millions wounded in action.

Pippin turned to painting to help mend his body and spirit. In the process, he created works of great power and poignancy, and distinguished himself as one of the most original artists of his generation. This gathering of six paintings highlights Pippin’s pursuit of a range of themes, from racial violence and the alienation of war to the serene beauty of his home in Chester County, Pennsylvania.

Pippin began to paint in earnest in the 1930s, combining the naïveté of the self-taught artist with an awareness of modern painting styles. World War I, in which he sustained a crippling arm wound, provided a frequent subject for his work, as did childhood memories and religious subjects.

Human rights and social issues also often figure in his pictures, but “Mr. Prejudice” is rare in its overt treatment of racism. In the style of a political poster, Pippin crowds a shallow space with symbols of the division of the races. Surmounting the scene, the brutish Mr. Prejudice drives a wedge into the golden V of victory.

Several years after returning to his home in West Chester, Pennsylvania, Pippin turned to painting to help his physical and mental recovery. This new pursuit strengthened his injured arm and enabled him to process haunting memories of the war.

Working on his own, Pippin developed a distinctive technique and style. To paint, he used his left arm to move his right arm while he clasped a brush in his right hand. By the time his work began to receive public attention, he had become a strong and original artist who was able to distill his experiences into images of great power and poignancy.