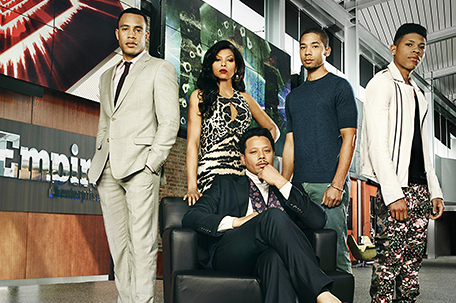 Luscious Lyon (Terrence Howard) is the ailing CEO of Empire Entertainment, a company he built into a music industry titan while his wife Cookie (Taraji P. Henson) was doing 17 years behind bars for a crime that he committed. Like a modern-day King Lear, he’s ready to surrender the throne to one of his heirs. Lear had three daughters, Luscious has three sons, and that similarity is just the tip of the iceberg in terms of unabashed allusions to the works of William Shakespeare made in the opening episode of Empire.

Directed by two-time Oscar-nominee Lee Daniels (for Precious), the premiere of this nighttime soap opera is mostly devoted to introducing characters and setting the stage for the impending struggle to control the thriving family business. There’s ambitious eldest son, Andre (Trai Byers), a Stanford MBA married to a greedy ice princess (Kaitlin Doubleday).

Middle child Jamal (Jussie Smollett) is quite a talented performer, but he’s also gay and out of the closet, a potential career-killer in the homophobic realm of macho hip-hop. Finally, we have youngest bro Hakeem (Bryshere Y. Gray), a budding rap star already on the rise. Complicating matters is the fact that their mom’s just been paroled, and she’s eager to stake a claim to her rightful share of the firm for having quietly taken the rap for their former-drug dealer daddy.

Among the supporting cast members are Gabby Sidibe as Luscious’ assistant Becky, Jennifer Joan Taylor as Dr. Shahani, and Tom Gaitsch as an attorney. Though a tad melodramatic for this critic’s taste, the show’s over the top antics are apt to cultivate a loyal following among the desired demographic, provided Lee Daniels and his creative team come up with a weekly cliffhanger to keep the audience curious enough to tune in again and again and again.

A word to the wise: Thou cannot go wrong by pilfering plotlines from the brilliant Bard of Avon.