Emmett Till images have multigenerational impact on artists 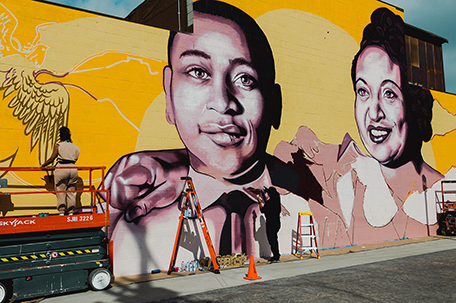 ABOVE PHOTO: Artist Brandan “BMike” Odums, right, works with artist Whitney Alix on a mural depicting Emmett Till and his mother Mamie Till-Mobley in Los Angeles on Oct. 22, 2022. The mural is part of a collection called “Impact of Images” and was commissioned by Lead With Love, in collaboration with the studio and production company behind the film “Till.” (Carlos Solorzano via AP)

Devin Allen admits that he occasionally behaved like a knucklehead, growing up in Baltimore. But he was not so irreverent as a tenth grader that he could see an image of Emmett Till’s open casket and not find it arresting.

The story of the 14-year-old Black boy who was lynched in Mississippi became widely known because his mother, Mamie Till-Mobley, asked a press photographer to document Emmett’s funeral. The horrifying 1955 photographs depicted tangible evidence of how violent racial hatred was plaguing the U.S., catalyzing the civil rights movement.

“Back then, I was like, ‘Wow, that happened so long ago. It would never happen now,’” Allen said, recalling the first time a high school history teacher showed him the images.

Yet, roughly 10 years later, Allen himself would capture searing images of protests and civil unrest in Baltimore after the 2015 death of Freddie Gray, a Black man who died in police custody. Allen’s reverberant black-and-white image depicting a protester running from a line of charging police officers made the cover of Time magazine that year and is in the Smithsonian collection.

Allen’s photographs highlighting the effects of police brutality on Baltimore’s Black community are part of the new “Impact of Images” campaign, inspired by the power of photographs like the ones of Emmett printed nearly 70 years ago in Jet magazine. The exhibit, curated by Lead With Love, is in collaboration with the studio and production company behind the biopic “Till,” which goes into wide release Friday.

The collection includes the celebrated work of Black photographers and photojournalists from the civil rights and post-civil rights era, such as Gordon Parks, Kwame Brathwaite, and Ernest Withers, alongside work from photographers of the Black Lives Matter generation. It will open to the public Saturday at Atlanta’s ZuCot Gallery, a Black-owned gallery.

“When I became a photographer, I started understanding,” Allen said. “I’m nothing but a conduit, doing something that has been passed down from generation to generation. We are truthful revealers. We are storytellers. We are light bringers.”

Another featured photographer, Noémie Tshinanga, took up photography as a young teenager. Much of her professional work is about showing Black people when they are not in pain, grief, or anguish.

“It doesn’t matter who you are, whether you’re a notable figure or someone walking down the street like, your existence is enough,” the Brooklyn-based photographer said. “That is the importance of showing that flip side of just us being.”

The collection includes Tshinanga’s regal portrait of the late, pioneering Black actress Cicely Tyson. There’s also a photograph of a Black man on a beach, eyes shut, and head tilted as though he is taking in a healing breath of sea breeze.

Tshinanga first saw the image of Emmett’s open casket as a teenager. Like Allen, she didn’t fully grasp its continued relevance until one of her generation’s versions was splashed across social media in 2014.

“I remember Mike Brown’s photo and just like everyone trying to figure out what was happening and just kind of processing that,” she said, referring to an image of the lifeless body of Michael Brown, left for hours in the middle of the street after the Black 18-year-old was fatally shot by a white police officer in Ferguson, Missouri.

“And so, once that image was ingrained in my head, it made me understand Emmett Till’s image,” she said.

In the late summer of 1955, Till-Mobley put her son on a train from Chicago to visit family in her native Mississippi. She warned Emmett he was bound for a place where his safety depended on his ability to mute his outgoing, uncompromising nature around white people.

In the overnight hours of Aug. 28, Emmett was taken from his uncle’s home at gunpoint by two vengeful white men. Emmett’s alleged crime? Flirting with the wife of one of his killers.

Three days later, a fisherman on the Tallahatchie River discovered the teenager’s bloated corpse. An eye was detached, an ear was missing, and his head was shot and bashed in.

“They would not be able to visualize what had happened, unless they were allowed to see the result of what had happened. They had to see what I had seen,” Till-Mobley said in a 2003 memoir. “The whole nation had to bear witness.”

Till-Mobley handpicked Jet photographer David Jackson, a Black man who had spent much of his career documenting the horrors of Jim Crow segregation in the South, to take the controversial images of her son’s body at a funeral home in Chicago.

The vast majority of U.S. news outlets worried that they would drive away readers and advertisers if they printed graphic images of the teenager’s body — but not publishers in the Black press. John H. Johnson, the late founder of Jet and Ebony, dared to show what happened to Emmett.

“(Johnson) said, ‘If his mother asked me to do it, I was gonna do it no matter what,’” said Margena Christian, a senior lecturer at the University of Illinois at Chicago and former editor and writer at Jet and Ebony. She worked for a decade with Johnson, who would occasionally recount the thought process behind Jet’s coverage.

Jet discontinued its print edition in 2014, but president Daylon Goff said the now-digital brand continues to promote its legacy as the outlet that fearlessly told Emmett’s story.

The images of the teenager’s open casket are a turning point in the plot of “Till,” the first-ever feature-length retelling of the atrocity and Till-Mobley’s pursuit of justice. In her research for the film, director Chinonye Chukwu learned that Till-Mobley was “very intentional” in how she shared the story of her son’s murder with the world.

“It was no accident that she chose a Black photographer for the photo,” Chukwu told The Associated Press. “She knew what she was doing, and she knew the importance of us telling our own story.”

Reggie Cunningham, another featured “Impact of Images” photographer, began taking photos during the Ferguson uprising over Brown’s death. While many photos showed pain and confrontations between residents and police, his images included depictions of joy and a sense of community in the predominantly Black suburb of St. Louis.

Years later, after his wife and another prominent voice from the Ferguson protests, Brittany Packnett-Cunningham, gave birth prematurely to their son, he documented their bond. Those black-and-white photos are part of the image collection.

“It was about how much she loves him and the joy that she brings him in her motherhood,” Cunningham said. “That is the story that I really wanted to tell.”

These are the images he wants his son accustomed to seeing as he grows up, Cunningham said: “In my work, I seek to tell these stories and spread awareness of the full expanse of Blackness, in an effort to create an affinity for our experience.”

Brothers and ZuCot Gallery managing partners Onaje and Omari Henderson said people coming to see the exhibit won’t feel like they are “going into a repast after a funeral.” Instead, they said, visitors will see a showcase of resiliency.

The collection — which can be viewed every Saturday and by appointment on weekdays until Nov. 13 — also includes personal photos from the Till family, stills from the movie, and images from Ebony and Jet.

In addition to the exhibit in Atlanta, a mural bearing the likenesses of Emmett and Mamie Till-Mobley is up at The Beehive, a Black-owned space in South Los Angeles. New Orleans-based artist Brandan “BMike” Odums, whose artwork was recently featured on the cover of actor Will Smith’s autobiography, dedicated the mural alongside artist Whitney Alix last weekend.

Before completing the mural, Odums told the AP Till-Mobley’s courage in telling her son’s story through arresting photographs anchors him in his mission as an artist.

“That’s what the power of our images, the power of our voice does,” he said. “It ripples into spaces and rooms where people might not be ready to have the conversation. But the ripples go far and wide.”