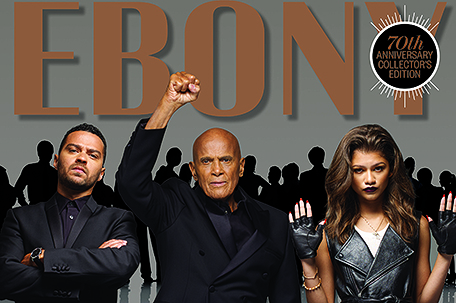 Jesse Williams, Harry Belafonte and Zendaya featured in celebration of the 2015 Power 100 List presented by Nationwide

CHICAGO — EBONY® Magazine today released its 70th Anniversary Collector’s Edition Cover. The cover of the December/January issue boldly urges its readers to “Stand For Something”.  With a central focus on advocacy, audacity and the arts, the double issue also rolls out the 2015 Power 100 List, with a header that reads “Power (100) To The People”.

The message of this impactful cover is plain: Standing for something has a very long tradition in the Black community. Witness 88-year-old Belafonte on the cover passing the baton of Black power and pride to generations of entertainers to come. Inside, the editorial team captures the metaphor and the reality.

These achievers have had noteworthy accomplishments over the past year, representing a variety of fields, including politics, business, education, media, religion, music and more.

“It is truly an honor to celebrate the tremendous talents and accomplishments of the honorees on this year’s Power 100 list,” said Kierna Mayo, editor-in-chief of EBONY Magazine.  “From the #BlackLivesMatter movement to technology disruptors to the boardrooms of Fortune 500 companies, all of the selected individuals have made an undeniable impact. They represent outstanding examples of greatness, and provide hope and inspiration for the next generation.”

The famed EBONY Power 100, 70th Anniversary Gala presented by Nationwide, will take place on Wednesday, December 2 at The Beverly Hilton in Los Angeles. The 70’s inspired gala serves as a celebration of Black pride and promise, EBONY’s mission for over 70 years.

For a fourth consecutive year, Nationwide will proudly present the prestigious affair to celebrate honorees on the 2015 EBONY Power 100 list.

“Nationwide is honored and privileged to serve as the presenting sponsor of the EBONY Power 100 Gala celebrating the 70th Anniversary,” said EVP and Chief Marketing Officer Terrance Williams. “Through this great partnership, we are proud to pay tribute to the past and present honorees whose commitment to excellence represents the very best in the country.”

Hosting the star-studded evening will be comedian, actor, writer and late-night host, Arsenio Hall. Hall is best known for his work on the celebrated Arsenio Hall Show, as well classic comedies like Coming to America and Harlem Nights.

The 2015 Power 100 list will appear in the December/January issue of EBONY, on newsstands starting November 25. The full list of the EBONY Power 100 and gala details can be found at http://www.ebony.com/power100-2015/.