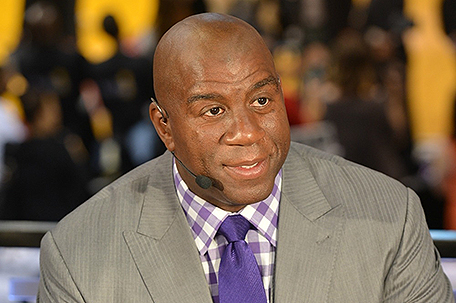 ESPN announced last week that Earvin “Magic” Johnson, the two-time Naismith Basketball Hall of Famer and sports icon, will return to the company and re-join “NBA Countdown” as a studio analyst this season, first appearing as part of ABC’s Christmas NBA coverage. From there, Johnson will join “NBA Countdown” pre-game coverage for the NBA Saturday Primetime on ABC series – the NBA’s marquee game of the week, starting Jan. 21, 2017.

Johnson will re-unite with Michael Wilbon, who is also making his return to “NBA Countdown” as an analyst this season on Saturday nights. They will join Sage Steele, returning for her 4th season as “NBA Countdown” host, to form the new Saturday trio. Saturday editions of NBA Countdown begin at 8 p.m. ET and are 30 minutes long, prior to the 8:30 p.m. game broadcast.

“I’m so excited to be working with my ESPN family again on ‘NBA Countdown’ Saturday nights,” Johnson said,  “Michael, Sage and I are going to have a lot of fun this season while we cover the greatest sport in the world. Basketball has been so good to me, and I can’t wait to once again share my love and passion for the game with the fans and my ESPN colleagues.”

Johnson previously served as an NBA studio analyst from 2008-2013 and he worked alongside Michael Wilbon on “NBA Countdown” from 2011-2013. Wilbon, one of ESPN’s most visible commentators, will continue his regular role as co-host of “Pardon The Interruption,” among his several other responsibilities.

Kevin Wildes, ESPN vice president, original content: “In addition to being one of the most famous sports figures ever, Magic brings undeniable charisma and virtually unparalleled credibility to ‘NBA Countdown.’ We’re glad to welcome Magic back to ESPN and to reunite him with Michael Wilbon, who is one of the most popular and authoritative sports commentators in the business. They have an established chemistry from years of working together, and with host Sage Steele leading the charge and setting the tone, this trio will be a delight for NBA fans.”

Johnson, considered to be one of the NBA’s greatest all-time players, is a five-time NBA Champion, a three-time NBA Finals M.V.P. and a 12-time NBA All-Star, among a multitude of other accomplishments during his remarkable career at the helm of the “Showtime” Los Angeles Lakers.