Early praise for ‘The Last Jedi’ after elaborate premiere 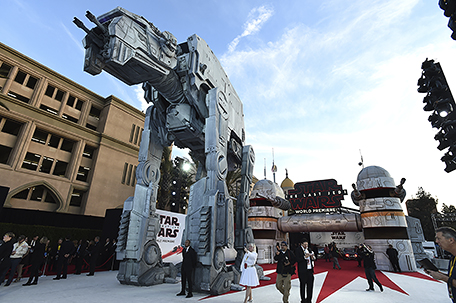 ABOVE PHOTO:  A general view of atmosphere at the Los Angeles premiere of “Star Wars: The Last Jedi” at the Shrine Auditorium on Saturday, Dec. 9, 2017 in Los Angeles. (Photo by Jordan Strauss/Invision/AP)

LOS ANGELES — There were cheers, gasps, droid photo opportunities, casino games and more than a few standing ovations at the jam-packed world premiere of “Star Wars: The Last Jedi” Saturday night in Los Angeles, which many are already praising online.

Rian Johnson, the writer and director of the eighth installment of the franchise, dedicated the night to the late Carrie Fisher, who died after filming had completed.

“She’s up there flipping the bird and saying, ‘Don’t bring this night down with solemn tributes,’” Johnson said on stage at the Shrine Auditorium.

It was in that spirit that Johnson excitedly introduced his cast, including Mark Hamill, Adam Driver, Daisy Ridley and Laura Dern. Hamill and composer John Williams, who Johnson called one of the “greatest living film composers” were among the few who got standing ovations.

“Let’s watch a Star Wars movie!” Johnson exclaimed as the cast took their seats, the lights dimmed and the yellow Star Wars logo and iconic scrawl appeared on screen to signal the start of the film. The enthusiastic audience laughed and cheered throughout much of the two-and-a-half-hour film. One audience member even shrieked “What?!” at a key scene deep in the film.

The elaborate premiere featured a massive assault vehicle and a procession of Stormtroopers and droids that preceded the first showing of the film in advance of its Dec. 15 release. The mood was joyous and pregnant with anticipation for the highly anticipated and guarded film, which sees the return of Hamill’s Luke Skywalker as well as Fisher’s final performance.

Journalists and others at the screening who shared their initial reactions online said “The Last Jedi” packed the adventure expected in a Star Wars film, but took it into new territory.

J.J. Abrams, who directed 2015’s “Star Wars: The Force Awakens” and will return to direct Episode IX told The Associated Press that the film was “great” and that “Rian killed it.”

“Logan” director James Mangold also praised the film’s director, calling the movie “a great chapter of a blockbuster franchise,” that also had Johnson’s “voice shining through.”

Producer Adam F. Goldberg wrote that the film made him feel like a kid again.

Entertainment Weekly’s Anthony Breznican said the film “will shatter you and then make you feel whole again.”

Many who posted online about the premiere said they were still processing the film.

Attendees at Saturday’s premiere were the first people outside the cast, filmmakers and top executives at Walt Disney Co. and Lucasfilm who had seen “The Last Jedi.” Director Edgar Wright, Patton Oswalt, Greta Gerwig, “Stranger Things” actor Gaten Matarazzo, and Constance Zimmer were among the attendees Saturday.

Wright, who makes a cameo appearance in the film as a rebel, added on Twitter that the film was, “Really great.”

At the after-party, which was modeled after Canto Bight, a casino-based city in the Star Wars galaxy seen in “The Last Jedi,” attendees played blackjack, roulette and craps to win commemorative Star Wars pins.

Fans at the premiere were also treated to up-close looks at new characters, including an elite squad of guards clad in red armor as well as a collection of droids, including the droids C-3PO, R2-D2, and BB-8, who walked and rolled down the red carpet before the film’s stars arrived.

Ridley, who plays Rey, arrived wearing a shimmering dress adorned with stars. Ridley was in good spirits, saying about her dress, “I mean, it’s just fun. It’s fun. And I feel fun. And it’s got stars on it.”

Newcomer Kelly Marie Tran wore a bright red dress with a lengthy train behind it. John Boyega, who earlier in the day tweeted that he might miss the premiere because a snowstorm had snarled travel out of Atlanta, arrived sporting a dark blue tuxedo and turtleneck.

Secrecy about the film remained in place on the red carpet. Anthony Daniels, who plays C-3PO, told a reporter looking for details on the film, “I’m going to let you work out everything for yourself.”

“The Last Jedi,” which arrives in theaters on Dec. 15, is one of the year’s biggest releases. Early box office projections are for the film to debut in the $200 million range for its first weekend.