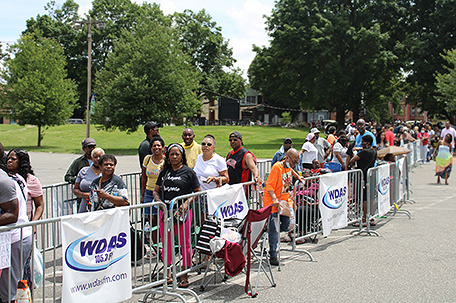 ABOVE PHOTO: Dell fans wrap around the venue  for their long-awaited concert tickets. (Photos: Jim Brown)

After The Dell Music Center announced on WDAS-FM 105.3 that tickets were going on sale for the shortened season of their Essence of Entertainment Concert Series, fans made a mad dash, whether by car, bus or bike to the popular venue recently to purchase their tickets for the respective concerts they’d finally be able to attend.

“I love the fact that we are in a position where we can get together as family, as friends in a safe environment outside,” she said.  “People are wearing masks. People aren’t wearing masks.  But it’s wonderful that we are at a place where the restrictions have been lifted by the CDC.”

“We did this based on the CDC, the City of Philadelphia and the mayor (Kenney), saying that in August, we will be at 100%. Had we not had that information, we wouldn’t have moved forward.  And even though we have a short period of time to get it done, thank God we were able to do it.”

As WDAS-FM was doing their radio show live from The Dell, Dell house DJ —DJ Gary O — was entertaining those who stood in lines for hours to get their prized tickets to the shows with his classic brand of throwback music that puts you in the partying mood.

WDAS-FM radio personality and Dell mistress of ceremonies Patty Jackson was also happy to be back in her comfort zone.

“I’m very excited, because, we really didn’t even know if we would have a season,” she said. “So, to be able to come out of this pandemic and to go back to being open, what we’re used to, it’s very exciting. The lineup is unbelievably exciting. It’s just a feeling of family and that’s what we have here at The Dell. It’s gonna be so exciting!”

I asked some people in the long ticket line — through heat and sporadic rain showers — how it felt to have one of their favorite venues back after a yearlong pandemic hiatus.

One of the fans decided that paying the additional surcharge of $12 dollars from TicketMaster was reason enough to stay in her car and purchase her tickets instead of standing in that line.

“So, last year was like, oh boy, it was a downer,” Butler continued. “Everybody comes here to have fun, have a party and have a good time, see the artist that you want to see and listen to the good music. It’s always a big party. It’s always a good time. So, I’m so elated and I see a lot of other people here happy. And after being closed in and quarantined for so long, everybody just wants to get out and have fun. So, that’s what we’re all here for!”

“Being out here at The Dell, it’s like a family reunion has started,” said David Scott of Germantown. “People are all over. We got “Showtime” here doing his specialty down here. I’m looking forward to all the concerts and shows and hopefully [we’re] getting in there before everything is sold out.”

“It’s good for Philadelphia,” Scott continued. “Good to see people back, rejuvenated, because it is always gonna be a good time with wholesome people with no riff raff and no nonsense. That’s what I love about it.”

“It’s a good feeling to finally be back to doing what you actually love,” he said. “I’m glad to see that the people are coming back out and seem enthusiastic about coming to these shows. You can tell by the lines. I got here around quarter to eight and the lines were wrapped out of The Dell onto Ridge Avenue and past the cemetery. So, people are anxious to get back.”

The Dell Music Center’s atmosphere is what’s great about Thursday nights again. It’s the place where grown folks go to unwind and party under the stars.