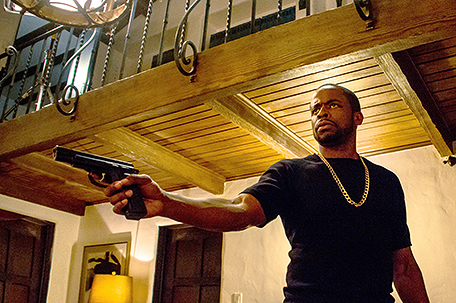 Born in Orange, New Jersey and raised in Sayreville, Dulé Hill began attending dance school when he was 3 years- old. He later received his first break as the understudy to Savion Glover on Broadway in “The Tap Dance Kid.”

Hill went on to perform the lead role in the musical’s national tour. And his additional stage credits include “Bring in ‘Da Noise, Bring in ‘Da Funk,” the Tony Award-nominated musical “After Midnight,” “Stick Fly,” “Black and Blue,” “Dutchman,” “Shenandoah” and “The Little Rascals.”

His other television credits include the role of Burton ‘Gus’ Guster in the long-running series “Psych,” which also earned him four NAACP Image Awards for Outstanding Actor in a Comedy Series. He also played Larry in the second season of “Ballers.”

Hill is a SAG-AFTRA Foundation board member and is involved with the non-profit organizations Justice for Vets and The Gabriella Foundation. In his spare time, he enjoys tap dancing and playing the saxophone, although he says he admits that he hasn’t quite mastered the art of the sax. 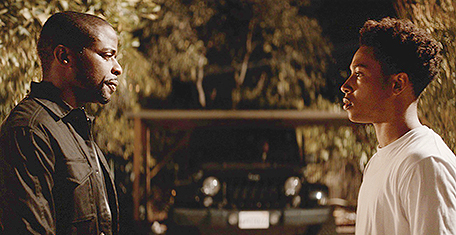 Here, Dulé Hill talks about his new movie, “Sleight,” an action thriller about a street magician [Jacob Latimore] who starts dealing drugs to raise his sister [Storm Reid] after the death of their mom.

Kam Williams: Hi, Dulé, thanks for the interview.

Dulé Hill: My pleasure, Kam. Thanks for taking the time.

DH: Beyond the exciting journey that J.D. Dillard and Alex Theurer delivered in their script, the main thing that interested me in “Sleight” was the chance to play a character outside of the scope of what I am used to playing on screen. As an actor, I’m always looking for new and interesting ways to challenge myself. The idea of playing a type of villain was extremely intriguing.

DH: “Sleight.” A story about good versus evil. Life versus death. Circumstances, choices and the powers a young mind can develop when life gets under pressure.

KW: The movie sounds like a mix of several genres.

DH: It is! J.D. and Alex did a fantastic job of combining an urban, dramatic thriller with a sci-fi superhero origin story to create this world. They took different aspects of genres we enjoy and mashed them up to create a film that is engaging, fresh and new, which was another one of the many reasons I wanted to be a part of this project.

KW: How would you describe your character?

DH: Angelo is a wolf in sheep’s clothing, the kind of guy who charms his way into your world until one day you realize that he doesn’t understand the meaning of the word boundaries. He’s your best friend and your bully all at the same time.

KW: What message do you think people will take away from the movie?

DH: I believe that a message people will take away from the movie is “Actions have consequences, so be careful of the choices you make.”

DH: “White Nights” or “The Cotton Club.” Gregory Hines and tap shoes. I couldn’t ask for anything more.

DH: I am not really that skilled in the kitchen. Thankfully, my lady, Jazmyn Simon, throws down when it comes to the cookery. But I can cook a mean cornmeal porridge that was taught to me by my Jamaican father. It’s generational…generational. Mi seh? [Jamaican slang for “Understand me?”]

DH: There are layers to this answer, but I would say, yes. One, being the moment I gave my life to Christ. My faith has been the focal point of my journey as far back as I can remember. I’m not going to sit here and say that I have always been an angel, but I am aware of the grace that has covered me over my lifetime. I give my all to live a life that is worthy of the favor I have received. I don’t always hit the mark, but I continue to press towards it each day. New mercies every morning… Give thanks for that.

DH: Enjoy life’s moments. Do not take them for granted, because you never know which one will be the last. Also, seek first the kingdom of God and his righteousness; and all these things will be added unto you. In other words, get your priorities straight; figure out what really matters, and focus on that.

DH: For peace to be.

DH: I’m a little old school, so I’m going to have to go with The Blob.

KW: Thanks again for the time, Dulé, and best of luck with the film.

DH: Thank you, Kam! I definitely appreciate the love. Blessings

To see a trailer for “Sleight,” visit: https://spaces.hightail.com/receive/AtV4J

Lauryn Hill will ‘make it up’ to fans after short concert