Duchess of Sussex expecting 2nd child, a sibling for Archie 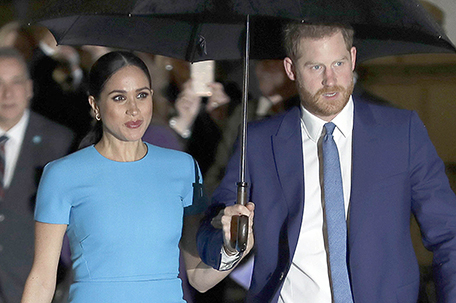 ABOVE PHOTO: Prince Harry and Meghan, the Duke and Duchess of Sussex arrive at the annual Endeavour Fund Awards in London on March 5, 2020. A British judge says the publisher of Britain’s Mail on Sunday newspaper can use the contents of a recent behind-the scenes book about the Duke and Duchess of Sussex in its defense against a privacy-invasion lawsuit brought by the duchess. Judge Francesca Kaye gave Associated Newspapers Ltd. permission on Tuesday, Sept. 29. 2020 to amend its defense to add “further particulars” relating to “Finding Freedom,” which was published last month. (AP Photo/Kirsty Wigglesworth, File)

LOS ANGELES — The Duke and Duchess of Sussex are expecting their second child, their office confirmed Sunday.

A spokesperson for Prince Harry, 36, and Meghan, 39, said in a statement: “We can confirm that Archie is going to be a big brother. The Duke and Duchess of Sussex are overjoyed to be expecting their second child.”

In a black-and-white photo of themselves, the couple sat near a tree with Harry’s hand placed under Meghan’s head as she lies on his lap with her hand resting on her bump.

The baby will be eighth in line to the British throne.

A Buckingham Palace spokesman said: “Her Majesty, Duke of Edinburgh, Prince of Wales and the entire family are delighted and wish them well.”

The duke told chimpanzee expert Jane Goodall in 2019 that he would only have two children for the sake of the planet.

Goodall said: “Not too many,” and Harry replied: “Two, maximum.”

Harry and American actor Meghan Markle married at Windsor Castle in May 2018. Their son Archie was born a year later.

In early 2020, Meghan and Harry announced they were quitting royal duties and moving to North America, citing what they said were the unbearable intrusions and racist attitudes of the British media. They recently bought a house in Santa Barbara, California.

In November, Meghan revealed that she had a miscarriage in July 2020, giving a personal account of the traumatic experience in hope of helping others.

A few days ago, the duchess won a privacy claim against a newspaper over the publication of a personal letter to her estranged father.