Drumline: A New Beat – the Panthers didn’t need an encore 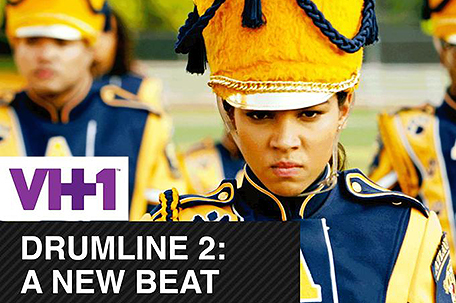 The original Drumline was lightning in a bottle when it premiered in theaters over a decade ago in 2002. The combination of a star-making turn from Nick Cannon and the fact that it more or less made popular the conceit of pushing the traditional sports movie story through the filter of something that’s not a traditional sport was uniquely compelling, helped even more by a terrific supporting cast (Orlando Jones, Zoë Saldana, Leonard Roberts), dynamically shot drumming sequences, and its HBCU setting. It wasn’t a classic by any means and it had its schmaltzy moments, but Drumline was really good and had genuine heart, and that shined through; it did for college football half-time shows what Stomp The Yard did for college step tournaments, and it caught on in a big way.

Twelve years later, someone at VH1 thought it would be a good idea to round up the remaining cast who hadn’t all moved on to bigger and better things and revive the property for Drumline: A New Beat, a standalone story following a new generation of drummers at the fictional Atlanta A&T university…that crashed and burned spectacularly in its premiere last night. I know, I was pretty interested to see how this would turn out too, but Drumline: A New Beat hits a new low in the world of sequels to impressive sleeper hits that nobody asked for. It’s so bad that the fact that it so obviously only exists because Drumline is a recognizable enough property that VH1 could hastily throw together a thinly sketched Degrassi-level HBCU fantasy world that’s overlong and overstuffed and slap the Drumline name on it isn’t even the worst thing about it. The Panthers didn’t need to be dragged out onto the field for an encore.

The story follows Dani (Alexandra Shipp), a recent high school graduate from a wealthy family with her eyes on Atlanta A&T’s prestigious Panthers drumline. Her parents want her to go to Spelman, which she outright rejects (a running “joke” throughout the film), and she decides to pay for tuition herself and bite the bullet. Her cousin Tyree is a senior drummer, but that doesn’t mean that new music director Sean Taylor (Roberts) is going to go easy on her, which means that Dani’s gonna give it all she’s got. A New Beat  has a very similar story to the original, with most of it devoted to Dani meeting her prerequisite group of misfits, including the sassy girl who’s smarter than she looks, the white boy, the pretty boy with a troubled past, and the gay best friend.

The reason that the big group of friends worked so well the last time is because we were actually given time to get to know them and get under their skin to see who they really were. A New Beat is so concerned with overstuffing the narrative that we’re not given that time for these characters to really sink in. It’s ultimately so much bones without any meat or connective tissue, which is strange because it’s over a half-hour longer than the first Drumline; The film moves from scene to scene with almost mechanical efficiency and lots of abrupt cuts, giving us just enough of the generic details that it’s almost impossible to care about what’s going on beyond the superficial “will everything be okay?” The acting is also stunted and hammy across the board, even from returning players like Roberts, which doesn’t help at all and undercuts the somewhat progressive character arcs they’re supposed to be going through.

The worst part is that this indulgence in mechanical melodramatic hogwash also undercuts the most interesting aspect of the story: the drumming. It’s decently shot but only comes in short bursts this time around, seemingly to make more room for the “drama.” By the time Nick Cannon’s Devon Miles shows up almost an hour into the movie to show face and put the young bloods in their place, A New Beat  has already crossed over the crappy point of no return and no amount of nostalgia can pull it back. A better list of songs played by all of the bands would’ve saved parts of this, but its catalogue is almost as dated as Cannon’s routine is. Nobody was asking for a sequel to Drumline, let alone one produced by VH1, but I’m genuinely surprised that it turned out this bad – a dated, bloated, utter waste of time that barely keeps to the beat of its own drum. Twitter’s going to eat this movie up for days!