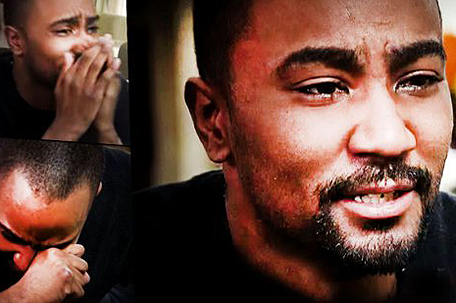 ABOVE PHOTO:  Nick Gordon from a scene from the Dr. Phil show. (Photo grab: CBS)

“He said he had an enormous amount of guilt and pain” regarding Brown, McGraw recounted in an interview Monday.

The 22-year old daughter of the late Whitney Houston and Bobby Brown is fighting for her life in an Atlanta hospital after being found unresponsive Jan. 31 in a bathtub in her Georgia home.

McGraw said that Gordon entered a rehab facility immediately after the taping last week, which McGraw and the show described as an “intervention.” He said that Gordon was “clearly in an altered state of consciousness. I asked him if he was sober, and he said `No.’”

Gordon felt “it was his job to protect Krissy, as he calls her, and that he obviously had failed,” and he’s distressed because he’s been prevented from seeing her, McGraw said.

Gordon’s attorneys have said that Bobby Brown has consistently denied Gordon permission to visit her in the hospital. A lawyer for Brown said that Gordon was offered a potential opportunity if he agreed to certain conditions.

Gordon didn’t discuss what happened to Bobbi Kristina Brown and wasn’t asked about it for the episode airing Wednesday because it would have been inappropriate, McGraw said.

Randy Kessler and Joe Habachy, his attorneys, did not respond Monday night to requests for comment.

During the taping, Gordon veered between incoherence and sounding “normal,” McGraw said. At one point, he played a Whitney Houston song on his phone and started weeping.

Asked if the chaotic encounter for TV was helpful to Gordon, McGraw replied: “It got him safely tucked away and into rehab.”

Houston brought Gordon into her household as an orphan at the age of 12, raising him and her daughter after divorcing Brown in 2007. After Houston’s 2012 death – also after being found in a bathtub – Gordon and Bobbi Kristina went public with their romantic relationship.

Bobbi Kristina: ‘She’s always with me’