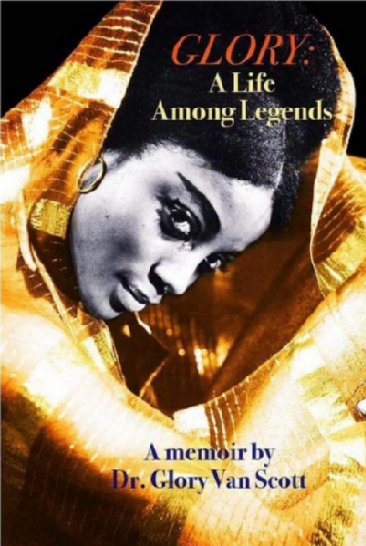 To state that Dr. Glory Van Scott is a living legend is an understatement.

Dr. Glory Van Scott is a dancer, actor, playwright, producer, choreographer and teacher. However, she is much more than these titles.

Her 246-page memoir, Glory: A Life Among Legends, documents a full life. No accomplishment of Dr. Van Scott was left untouched. She details working as a principal dancer for legends such as Katherine Dunham (her mentor who is credited by the United States Library of Congress as having created the first African American Concert Dance Technique), Agnes de Mille and George Balanchine companies to name a few.

Her fearlessness and confidence allow her to tell her story effortlessly from meeting Paul Robeson, Langston Hughes, meeting Michelle Obama at the White House and more. Yes, that moment is also in the book with a beautiful photograph of her and Michelle in conversation at the White House.

It was actress Cicely Tyson that referred Van Scott, a then high school student, to study theater under Vinnette Carroll, who was the first African-American woman to direct on Broadway.  Tyson placed the call on Van Scott’s behalf. The rest is history as they say.

Another fascinating footnote, among many in Van Scott’s storied career spanning five decades, is that she taught actors, including Philadelphia’s own Kevin Bacon, during her tenure as a theatrical instructor at the Pennsylvania Governor’s School for the Arts.

Dr. Van Scott, a Chicago native, shared her thoughts during our conversation on then-presidential candidate Barack Obama running for president:

We touched on some things that were not in the book such as her friendship with legendary late comedian and actor Nipsey Russell whom she co-starred with in The Wiz. Van Scott played the role of Rolls Royce Lady. Russell played the famous Tin Man character in the film which also co-starred Michael Jackson as the Scarecrow and Diana Ross as Dorothy. Russell was also a regular panelist on Hollywood Squares and more shows that made him a household name in mainstream America. He also starred in Spike Lee’s film Bamboozled.

“Nipsey I knew before I met Diana Ross and Michael Jackson,” said Scott.

It’s almost as if she knew early in life that she was planning on writing a memoir.

The detail with which Dr. Van Scott describes her life along with visuals will inspire many to document their own life experience. Aside from professional accomplishments, it is clear the values instilled in her as a youth by the women in her family had a profound impact on her life. In addition, the tragedies that occurred in her family, including that of her cousin Emmett Till.

She shared how the murder of her Emmett Till impacted her as a child and later as an adult.

“When it happened, my mother told me. I was sitting at the dining room table. I just got up and walked away. I absolutely stored it in my mind, my feelings and in my spirit for years.”

Years later Van Scott was reading a story in the newspaper, an artist drew a controversial painting of Emmett in the casket that was showcased at a museum in Washington DC.

“Suddenly I felt these tears come down my cheeks. I did not cry when I first heard that he had been killed.”

“I released what I had jammed up within myself and held.

”In the book, Dr. Van Scott pens a letter to Emmett sharing that moment when Mamie Till, Emmett’s mother, called to let her mom know that “you weren’t coming home to Chicago from your vacation. You had been killed by racists while visiting family in Sunflower County, Mississippi.”

The passing of Emmett Till gave Van Scott the resolve to push boundaries and push forward while living without fear.

Dr. Glory Van Scott memoir showcases an illustrious career in entertainment, theater and interacting with icons that many could only dream of including Langston Hughes.

What also makes this book phenomenal, is that in many ways it serves as a reference of the history and contributions of African-Americans in theater and dance, giving credit where mainstream history anals fail to do so.

Dr. Glory Van Scott’s memoir leaves the reader inspired to live their full life, pursue your dreams and be courageous doing so.

Glory: A Life Among Legends can be purchased on Amazon.com