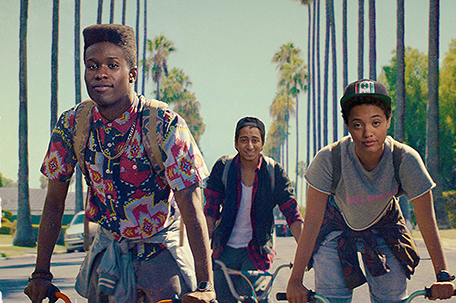 From the monent that the  film opens with the Naughty by Nature classic “Hip Hop Hurray”, the new movie Dope, from writer/director Rick Famuyiwa (Our Family Wedding) shows us that it’s wearing its old-school heart on its sleeve.

The hip-hop classic serves as introduction to fresh faced Malcolm (Shameik Moore), who is trying to get through his senior year of high school and his Englewood, California neighborhood with the help of his mom, Lisa (Kimberly Elise). With his close friends friends Jib (Tony Revolori, The Grand Budapest Hotel) and Diggy (Kiersey Clemons), Malcolm navigates everything from gang wars to hormones in this cinematic ode to 90’s culture that features narration from Oscar-winning actor Forest Whitaker.

The three best friends are self-proclaimed nerds, into video games and coding. But when it comes to style, they stick close to hip-hop’s Golden Age .  (There’s a scene where they dig in the crates at a record store which was delightful.)

When the trio gets invited to a birthday party thrown by neighborhood dope boy Dom’s (Rakim Mayers AKA A$AP Rocky), they end up getting involved in something that nerds aren’t usually associated with–the dope game–when some of Dom’s stash ends up in  Malcolm’s possession. 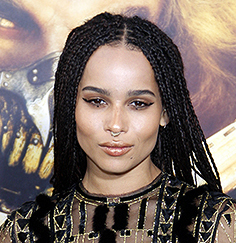 Because no hip-hop movie would be complete without a comely, scene stealing vixens, Dope has two of them.  There’s Nakia (Zoe Kravitz) a woman who keeps Malcolm on his toes while getting his math expertise to study for the GED, and then there’s Lily (model Chanel Iman) who is dripping with lust as she succumbs to the effects of a batch of MDMA so potent, it ends up being named after her.

Famuyiwa, who wrote the hip-hop cult classic Brown Sugar, teamed up with hip hop giants Pharell Williams and Sean “Diddy” Combs to get this film made and it was a big winner at this year’s Sundance Film Festival.  Combs’ son Quincy Brown even has a role as Jaleel, the ditzy son of dirty businessman Austin Jacoby (Roger Guenveur Smith, Do the Right Thing).

Black culture in all of its forms, ranging from hip hop to alternative rock is represented here. (The friends have their own rock band).

If there was one thing that kind of bothered me about Dope, it would be that the Jacoby family story was kind of just left there. I would have liked to have seen that resolved in some way.

Dope has something for both 90s babies and lovers of current hip-hop culture.  It’s sure to give the older generation reassurance that  youth culture has indeed reached back and is remixing things in the name of adding its own fresh flavor.