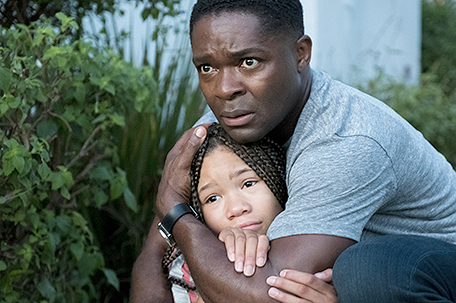 These days, seeing a person of color make it through to the end of a horror movie or thriller isn’t as much of a rarity as it’s traditionally been.

From Jordan Peele’s Oscar-winning movie “Get Out” and his recent hit “Us” to “The Perfect Guy” and the Octavia Spencer thriller “Ma,” Black folks have been surviving to the final credits in a whole host of thrillers these days.

This weekend, Blumhouse, the producers of “Get Out,” give us “Don’t Let Go” a new movie starring David Oyelowo (“Selma,” “Queen Of Katwe”) and Storm Reid (“A Wrinkle In Time,” “Euphoria”) as Detective Jack Radcliff and his niece Ashley.

Directed by Jacob Estes, the film follows Radcliff as he and his partner Bobby (Mykelti Williamson, “Forrest Gump,” “Fences”), try to solve the murder of Radcliff’s brother (Brian Tyree Henry of “If Beale Street Could Talk”), his sister-in law (Shinelle Azoroh) and Ashley when he gets a phone call from his niece…from another time loop.

Throughout the movie, Radcliff and Ashley try to solve the crime before it happens by working within their personal time loops, sending messages to each other by doing such things as leaving messages in chewing gum at a diner and spray painting on barn doors.

Because it brands itself as a classic thriller with a supernatural twist, there are a lot of things that are kinda stock in “Don’t Let Go.” For one thing, there are cops who don’t believe our protagonist and may be on the take themselves. Williamson and Alfred Molina (“The DaVinci Code,” “Spider Man 2”) fill those roles and they’re not bad here.

But where I sometimes had a problem with “Don’t Let Go” was the lack of opportunities for bathroom breaks built into the film.

Here’s what I mean by that. Because of how the time travel aspect was handled in this film, you won’t be able to look away from the screen, even for a second. If you do, you’ll get lost…or at least I did.

So if you don’t mind getting your popcorn and snacks before you sit down, and getting the kid sized drink instead of a small, I recommend “Don’t Let Go.” As thrillers go, it’s complex and well acted.

And most importantly, it adds to a genre that has really gotten its shine lately.