Dominque Kent stars as Becky in national tour of ‘Waitress’ 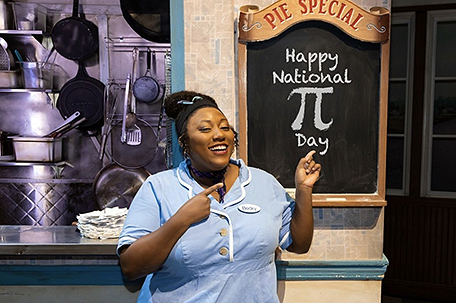 After a long hiatus, the Broadway musical “Waitress” is back with a national tour, just in time for Women’s History Month and spring. Based on the 1999 film “Waitress,” the musical tells the story of Jenna, a waitress and expert pie maker with big dreams. As Jenna struggles to find herself while battling an abusive relationship and simultaneously embarking on the journey of first-time motherhood, she finds herself surrounded by love from fellow co-workers Becky and Dawn. Pittsburgh native Dominque Kent takes on the role of Becky in her first national tour. Kent spoke with The SUN about her excitement around playing the character and the importance of the message in this story.

Kent’s musical journey began with singing in the church. She went on to attend a performing arts middle school where she studied voice. In 8th grade, she saw her first musical — “Cats” — and was completely blown away. When “Once Upon A Mattress” came to her school the same year, she decided to pursue musical theater.

“I thought, ‘Let me dip my toe into the whole dance while I’m singing and acting as well,’d and I fell in love with it,” she said. “I did theater in high school as well while I continued to study voice. I did all of the musicals each year, and eventually switched to musical theater going into college.”

Kent furthered her studies at the American Musical and Dramatic Academy in Los Angeles, where she currently resides.  After receiving an audition request from her agent, she followed through and landed the role of Becky, her first touring Broadway show role.

“I was told that I would be auditioning for an understudy for Becky and ensemble,” she said. “I submitted my tapes for it, because with COVID they weren’t doing any in person auditioning. After I submitted it, I got the call that I booked “Waitress” which is super exciting. This is my first tour — my national debut and it’s been an absolute whirlwind. My favorite experience is going into cities, seeing different theaters and how big or how small the house is, or the stage itself, and seeing all of the culture that’s around in each city. It’s been absolutely amazing.”

Under the direction of Tony Award winner Diane Paulus, with original music created by Grammy Award-winning singer-songwriter Sara Bareilles, “Waitress” is unique in many ways. This particular run of the show is also making history with the first-ever woman of color, Jisel Ayon Soleil leading the cast as Jenna. The show also being led by an all-female creative team.

“Sara actually saw our production of the show recently in New Haven,” Kent said. “It was amazing to have her, Lorin Latarro (choreography) and Nadia DiGiallonardo (original music supervision) in, as well as Abbey O’Brien (choreography) and our tour director Susanna Wolk in the audience.”

Becky is a powerful character that helps Jenna navigate her way throughout the show. Kent shared how she saw the character as a mirror image of herself.

“Becky is Jenna’s best friend and another waitress in the shop,” Kent said. “She is kind of like a big sister or an auntie to Jenna. She’s very outspoken and unapologetic — just a ball of fun on the stage. That’s pretty much how I live my life, too. Reading the script and really diving into who Becky is, I got to see a lot of myself in the character, which is nice.”

One of Becky’s breakout numbers in the show is “I Didn’t Plan It,”a reminder that life comes at you fast.

“I am obsessed with “I Didn’t Plan It” —  I’ve been obsessed with that song since it came out in 2016,”  Kent said. “It’s honestly been my dream to play this role and to be able to sing this song. The fact that I’m now getting a chance to live out my dream and do eight shows a week is just unreal to me.”

In addition to brilliantly crafted musical numbers and choreography, “Waitress” offers some very powerful messages for its audience.

“Our show is very real, and it’s grounded in life events that happen,” Kent said. “It’s very easy for musical theater to go into this whimsical land of fairytales, but with “Waitress” you can be seeing either yourself, your sister, brother or neighbor on the stage and people can connect to that. I really hope our audience members walk away feeling fulfilled and full of love and light. Hopefully people will receive that watching the journey of Jenna’s self-love and discovery in who she is. If one person in the audience takes away the lessons that Jenna, Becky and Dawn learn (because they are on the journey of self-discovery as well) that’s what I want. I’m hoping that people take away this beautiful lesson of empowerment and self-love.”

In addition to the message of self-love that is shared on the stage through “Waitress,” Kent has also openly shared her journey with alopecia as a way to help others embrace their beauty, not in spite of their differences, but because of them.

“I have alopecia, which is an autoimmune hair loss disease that I’ve suffered with since I was eight years old,” she said. “It’s something that’s always been kind of crippling for me and once I got to college, I said ‘I think I’d like to embrace this.’ Five years ago, I got to a place where I said, ‘I’m good, this is who I am… this is me.”

Be sure to follow Dominique Kent and support her journey on Instagram @itsdomkent. “Waitress” will be at The Academy of Music as part of the Kimmel Cultural Campus’ Broadway Series from  March 29- April 3. For more details on tickets and showtimes, visit: www.kimmelculturalcampus.org.