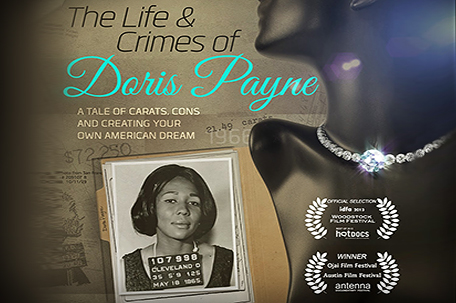 If you weren’t lucky enough to be living in a city where The Life And Crimes Of Doris Payne screened earlier this year (it saw a very limited, and short-lived theatrical run), and your cable or satellite TV service includes Al Jazeera America, you’re in luck. I was just informed that the feature-length documentary will make its TV premiere on Al Jazeera America on November 9, at 9PM ET/6pm PT, via the network’s “Al Jazeera America Presents” banner, whose mission is to bring viewers feature documentaries and original series from filmmakers around the globe.

Over a 60-year period, Doris Payne stole over $2 million in jewels from all over the world, occasionally getting caught, standing trial, serving a relatively short sentence, and released, only to do it all over again, quite unapologetically! The film probes beneath her consummate smile to uncover the secrets of her trade and what drove her to a life of crime. It includes stylized re-enactments of scenes from her life, as well as an extensive archive and candid interviews that all help reveal how Payne managed to jet-set her way into any Cartier or Tiffany’s – from Monte Carlo to Japan – and walk out with small fortunes – a rebel who defied ( and still, at over 80 years old, defies) society’s prejudices, creating her own *unconventional* version of the so-called American Dream.

She seems to relish the questionable, yet thrilling life she’s led as a jewel thief for almost her entire life. Certainly, she has some regrets; but, no longer a spring chicken, she’s seen the world, and lived the kind of life many of us can only dream of, given how prolific a thief she was, stealing countless diamonds, costing tens-of-thousands of dollars each, and selling them for tidy sums.

What’s even more fascinating about all this is that, she was able to do this for decades, as a black woman, beginning at a time in our history when black people were already under intense, conspicuous “surveillance” and scrutiny.

Reading between the lines of some of Doris Payne’s statements, she would likely do it all again, if she’s set free again!

Halle Berry was once attached to star in a project based on her life. But it’s probably dead now. At the time of the announcement, back in 2009, there was no word on when it would go into production, nor who its director would be.

I doubt it’ll ever happen; and if it does, it likely won’t be with Halle Berry anymore.

In the meantime, you should check out The Life And Crimes Of Doris Payne, which is directed by Matthew Pond and Kirk Marcolina, when it premieres on Al Jazeera America in a couple of weeks.

It’s an absolutely riveting story, far more interesting than some of the fiction that makes it to theaters these days; I’d really love to watch a scripted narrative film, with the right talent and budget, on Payne as well.