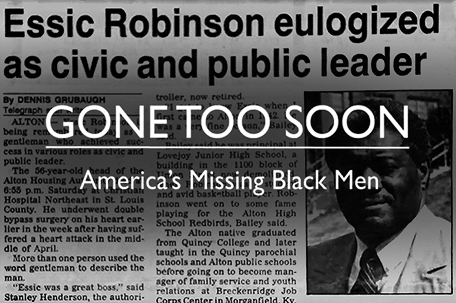 ALTON, Illinois–Early death is a phenomenon particular to Black men in America, yet it is missing from most conversations about racial inequality and barriers to creating and sustaining legacy wealth. “Gone Too Soon: America’s Missing Black Men” is a documentary in progress that examines the lingering social and economic impact of the early deaths of Black men on families and communities. The film is set in Alton, IL, a former industrial hub that has experienced an exodus over the years, spurred by deindustrialization and feelings of despair. Filmmaker Shawn Taylor, an Alton native, recently launched an Indiegogo campaign seeking to raise $75,000 to complete the project.

Alton is a town of less than 29,000 people along the Mississippi River, about 17 miles north of Ferguson, Missouri. The early deaths of the primary breadwinners and future leaders in Black families is eroding the town’s economic, social and political structure. The life expectancy of Black males in America is 71.1 years – five fewer years than White men, on average. The majority of African-Americans live in communities with shortages of Black men who are most likely to die during the wage-earning years.

Filmmaker Shawn Taylor —a former newspaper writer and editor — hopes the film will ignite a national dialogue in the Black community over how to better serve patients, families and communities by focusing on bringing Black male life expectancy on par with White men. Since she began filming in 2014, a few months before Michael Brown’s death in Ferguson, the film’s subtitle has changed from “Alton’s Endangered Black Men” to “America’s Missing Black Men.”

“Alton is a microcosm; early death is impacting Black families everywhere. I understand why the social discourse has focused on police shootings of unarmed Black men. But there’s an even bigger picture to look at when you consider the sheer numbers of lives lost for a multitude of other reasons, many of them health-related,” said Taylor. “I’m not all right with these outcomes.”

Taylor said the film shines a light on Black middle-class families, many of whom were bolstered by Alton’s once-robust manufacturing economy. De-industrialization changed that, and some households never recovered. The murder of a promising young man about to enter the Navy to become an engineer is tied to those diminished opportunities and the jealousy it inspired in those who wound up on the low end.

Taylor says she also wants to show Black men as she has known them growing up in a small community: as breadwinners, monumental dads, civic leaders and mentors.

“Black middle-class families are not immune to the type of violence and poor health outcomes impacting people in poor, urban communities,” she said. “We need to ask ourselves why the same safeguards that work for the mainstream aren’t working to protect Black families.”

The film also touches upon the legacy of jazz great Miles Davis, who was born in Alton. His legacy had been ignored until recently with a multicultural effort to erect a statue in his honor to boost downtown tourism.

The Indiegogo campaign perks range from $10 for a social media mention to $30,000 for an executive producer credit. The film will feature narration by actor Harry Lennix (“The Blacklist”) and an original song. Visit the campaign to view the demo trailer at https://www.indiegogo.com/projects/gone-too-soon-america-s-missing-black-men-community/x/87995#/