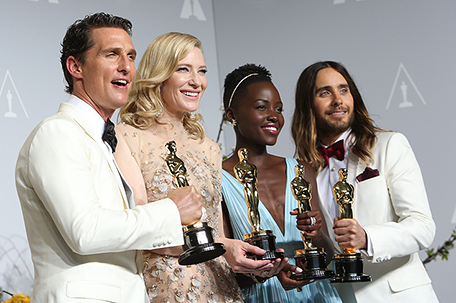 By Jessica Herndon and Jake Coyle

For the first time, a film directed by a black filmmaker — Steve McQueen of “12 Years a Slave” — won Best Picture and a Latino — Alfonso Cuaron of “Gravity” — took home Best Director in a ceremony presided over by a lesbian host and overseen by the academy’s first Black president.

McQueen’s grimly historical drama “12 Years a Slave” took Best Picture, leading the usually sedate filmmaker to jump up and down in celebration after his acceptance speech.

The British director dedicated his award to “all of the people who endured slavery and the 21 million people who still suffer slavery today.”

Cuaron’s lost-in-space thriller “Gravity” led the Oscars with seven awards, including cinematography, editing, score, visual effects, sound mixing and sound editing. Some in his native Mexico have been critical that since the attention came for a Hollywood release and not a Mexican-themed film, his win didn’t have the same kind of importance.

“I’m Mexican so I hope some Mexicans were rooting for me,” he told reporters backstage.

The entire Oscar ceremony had the feel of a makeover for the Academy of Motion Picture Arts and Sciences — an institution that has sometimes seemed stuck in the past. After a Los Angeles Times report revealed the academy was overwhelming older white men, new president Cheryl Boone Isaacs has pushed for a more varied membership.

The movie industry that the Oscars reflect has also been reluctant to tell a wider range of stories.

“Dallas Buyers Club,” the best picture-nominated drama about AIDS in 1980s Texas, took two decades to get made after countless executives balked at financing such a tale. Matthew McConaughey and Jared Leto won Best Actor and Best Supporting Actor for their roles in the film as a heterosexual rodeo rat (McConaughey) and a transgender drug addict (Leto) united by HIV.

“Thirty-six million people who have lost the battle to AIDS and to those of you out there who have ever felt injustice because of who you are or who you love, tonight I stand here in front of the world with you and for you,” said Leto is his acceptance speech.

Cate Blanchett, Best-Actress winner for her bitter, ruined socialite in Woody Allen’s “Blue Jasmine,” used her acceptance speech to trumpet the need to make films with female leads — films like her own and like “Gravity,” starring Sandra Bullock. A study by analyst Kevin B. Lee found that last year’s lead actors averaged 100 minutes on screen, but lead actresses averaged only 49 minutes.

“To the audiences who went to see the film and perhaps those of us in the industry who are still foolishly clinging to the idea that female films, with women at the center, are niche experiences, they are not,” said Blanchett. “Audiences want to see them and, in fact, they earn money.”

“12 Years a Slave” also won awards in the writing and acting categories. John Ridley picked up the trophy for Best Adapted Screenplay, which was based on the 1853 memoir by Solomon Northup. The screenwriter is only the second Black writer (Geoffrey Fletcher won for “Precious” in 2009) to win in the category. Backstage, the “12 Years” team mentioned their efforts to include Solomon Northup’s memoir as part of high school study. The National School Boards Association announced in February that the book is now mandatory reading.

“It’s important that we understand our history so we can understand who we were and who we are now and most importantly who we’re going to be,” said Brad Pitt, who produced “12 Years.” ‘’We hope that this film remains a gentle reminder that we’re all equal. We all want the same: Dignity and opportunity.”

Lupita Nyong’o was a first-time Oscar winner for her supporting role as field slave Patsey in “12 Years.” ‘’I’m a little dazed,” said Nyong’o backstage of winning the Oscar. “I can’t believe this is real life.”

Nyong’o is the sixth Black actress to win in the Supporting Actress category — and the first major Oscar win for Kenya (the president of Kenya congratulated her in a tweet) — following Hattie McDaniel (“Gone with the Wind”), Whoopi Goldberg (“Ghost”), Jennifer Hudson (“Dreamgirls”), Mo’Nique (“Precious”) and Octavia Spencer (“The Help”).

Foreign language film nominees included “The Missing Picture,” the first-ever Oscar-nominated film from Cambodia. “The Act of Killing,” a dark look into the mass killings of communists and ethnic Chinese in Indonesia in the 1960s, was nominated for Best Documentary Feature.

In her second time hosting, openly gay Ellen DeGeneres sought to make celebrities more like plain folk. She passed out slices of pizza to the front rows at the Dolby Theatre, then passed the hat to pay for it. She also tweeted a “selfie” with such stars as Meryl Streep, Julie Roberts, Jennifer Lawrence, Bradley Cooper, Pitt and Nyong’o. The shot “made history,” DeGeneres told the audience later. It’s since been retweeted more than two million times.