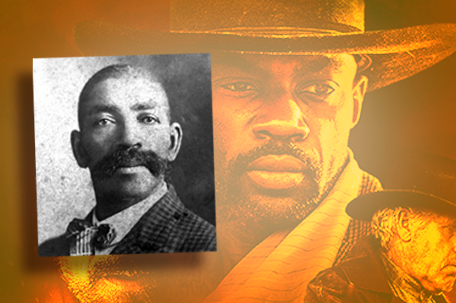 Many are familiar with the story of the Lone Ranger. The  popular 1950s television program  followed the adventures of a fictional former Texas Ranger and his Native American friend Tonto on their quest to take down outlaws.

Decades later, the 2013 “Lone Ranger” film starred Armie Hammer and Johnny Depp.  In every version of the “Lone Ranger,” the main character was depicted as a White man. However, the truth is that the story is based on the life of Bass Reeves, a former slave who became the first Black deputy U.S. marshal west of the Mississippi River.

Director and writer Wes Miller shares Bass Reeves’ story in the Lionsgate film “Hell On The Border.” Miller spoke with The SUN about the catalyst behind telling Reeves story.

“Hell On The Border” stars David Gyasi as Bass Reeves, Ron Pearlman as his sole posse member and Frank Grillo as Bob Dozier, an elusive outlaw. Wes Miller shared why it was important to bring the story of the legend Bass Reeves to life.

“I’ve always been a big fan of the Western genre,” Miller said. “It just allows so much room for interpretation, symbolism and American growth. Also, in loving them, I found that there was a lack of westerns with black heroes. So, I really just dove in.”

“I started researching and looking for individuals that have unique stories that could still be relevant today,” he continued. “I came across Bass. I was really intrigued by his life, the fact that this former slave became one of the most powerful law enforcement agents and that history kind of was silent on it.”

Miller went above and beyond to ensure that the story of Bass Reeves was told with respect and accuracy.

“The research process was pretty in depth,” he said. “I read anything I could find, but I also went to the archives and read transcripts where I could see his words when he would testify in court as a marshal.  I also learned that at one point, he was charged for the murder of a friend. I had his testimony sitting on the stand and was able to see his diction, his dialogue and how well-spoken he was especially considering that he was a slave and couldn’t read.”

African Americans were unable to tell our stories for a very long time. Additionally, we did not see ourselves in prominent roles that were not degrading or subsidiary in film or television. Miller shared his thoughts on breaking the glass ceiling.

“It’s a shame because we were so relegated to being the sidekick… if we even made it into a film,” he said. “Just to be able to tell the stories of these unsung heroes in a way that will last a lot longer than we will, is so encouraging. It’s one of the motivators for me as a filmmaker to get up every day and keep going.”

With such a full and complex life, “Hell On The Border” serves as an origin story of sorts for Reeves.

“As a dramatist you take that information and say ‘how can we tell a story that honors Bass, but also works in a narrative format?”, he said. “Trying to tell his full story in two hours would really not do him justice. We said let’s introduce the world to this man and not rush through it. Hopefully we’ll get a part two and be able to examine another part of his life to give a full appreciation of who he was.”

The Lone Ranger story is just one example of many where our ancestors were not given their just credit for the contribution they’ve had, specifically in this country. Miller shared his thoughts.

“It’s sad that not only was Bass Reeves erased from history, but also replaced by a Caucasian representative,” he said. “It’s a reflection of where our country was and has been. For a certain segment, ignoring and discounting the contributions of African Americans was common and sadly it still happens. As African American creators and storytellers, it’s important to push back on that and have partners such as Lionsgate who are willing to stand by their creatives to help get these stories out.”

Portraying the complexities of Bass Reeves was a challenge. At times his dedication to the law superseded his own best interest.

“He says in the movie, ‘the law put me in chains, and the law also set me free’ which for us was kind of the debate point,” Miller said. “Would he just be seen as the representative being used by “the man” to impress other people? Consider the other side. Back then, the country was at a crossroads asking itself, ‘are we going to be a civilized society or an outlaw society with vigilantism and self-justice?’ Based on my research, Bass came to believe that in order for us to grow as a society, we have to have an objective and consistent law enforcement presence.”

The reason why it’s important to acknowledge Bass Reeves as the original “Lone Ranger” was because his Blackness isolated him… no one wanted to work with him. Despite the racism and never-ending obstacles, Reeves prevailed.

“As a dramatist, it was important to exhibit the level of sacrifice and dedication that was needed,” Miller said. “It makes you wonder what was going on in his heart and his head. He had to overcome a lot to become who he was and not lose himself. Bass asked his wife in the film, ‘what do you do when the whole world doesn’t believe in you?’ I think that’s still relevant today… still today people think that we as African Americans can’t accomplish certain things. One of my mottos has always been, make believers out of them.”

Thankfully, writers and directors like Wes Miller continue doing the work to ensure that our true history is told and never forgotten. “Hell On The Border” is available on DVD February 11, 2020.

Was the man behind ‘The Lone Ranger’ mask a Black man?