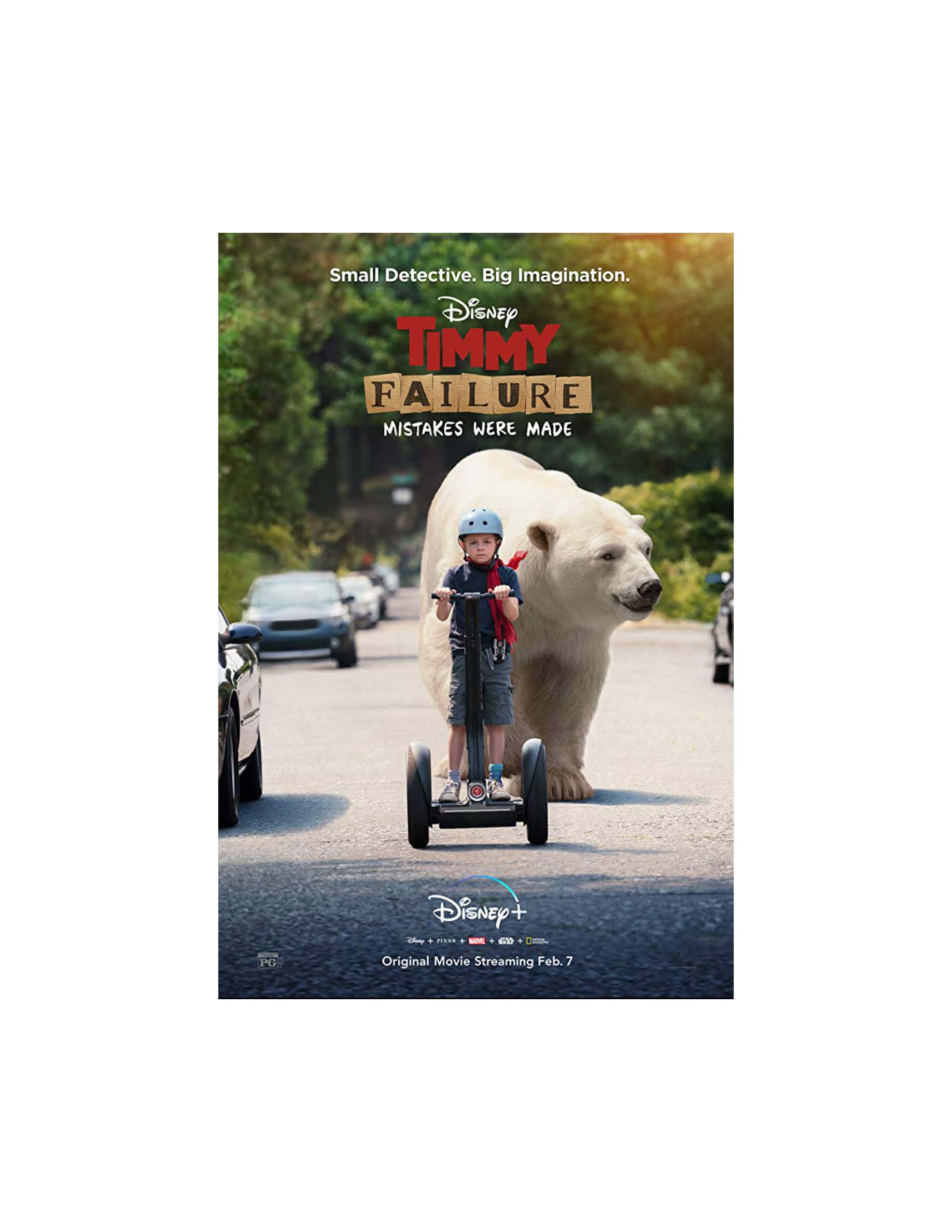 The new Disney Plus film “Timmy Failure: Mistakes Were Made” is an invigorating coming of age story about childhood and imagination. The film is based on the book series of the same name by Stephen Pastis.

“Timmy Failure: Mistakes Were Made” tells the story of an 11-year-old boy named Timmy Failure, his 1,500 pound imaginary polar bear Total and the adventures they encounter while running his detective agency called “Total Failure.” The film — written by Pastis and Tom McCarthy, and directed by McCarthy — stars Winslow Fegley as Timmy Failure, Ophelia Lovibond as Patty Failure, Wallace Shawn as Frederick Crocus, Craig Robinson as Mr. Jenkins and Kyle Bornheimer as Crispin. McCarthy and Winslow spoke to The SUN about their joy in being part of this imaginative film and the film’s overall message.

Adapting a book series into a film is not easy task, but one Academy Award winning director Tom McCarthy took it on.

“A colleague put the book on my desk, I didn’t pick it up for a bit… and then finally I said ‘what is this book? Let me give it a shot,'” McCarthy said. “From page one, the voice of Timmy sort of grabbed me. I loved the humor of it, the drawings and I loved how sort of bonkers it was. At its heart, there was a reality and a pathos to it that I thought could be an interesting film if we could figure out a way to crack the book, which zigs and zags even more than the movie. I met the author of the book, we started chatting and then I brought to my friends over at Disney.”

The character Timmy Failure is a complex one. He’s stoic, yet full of fantasy, and he sees the word differently than most. Fegley shared his method of preparation for playing the character.

The way Timmy moves through life doesn’t always resonate with others. Despite his unpopularity with some, the character is completely comfortable in who he is.

“Timmy definitely has his own rhythm in life and he moves to his own drumbeat, but he’s a very intelligent kid and insightful in many ways,” McCarthy explained. “I think he processes information a little differently than other kids.”

In addition to the magic of Timmy’s imagination, the film creators did an incredible job at bringing Timmy’s best friend and business partner Total the polar bear to life.

“Sometimes it was just the polar bear head and Michael wearing a gray stocking suit,” McCarthy added. “We were always trying to give Winslow something to act against. We were also trying to give our cinematographer Masa, something to be able to shoot to know the space, weight and volume the bear was going to hold. A lot of thought went into how we were laying out the film compositionally and visually in a way that was both elegant but still very satisfying to our younger viewers.”

Not only does “Timmy Failure: Mistakes Were Made” offer adventure, it also offers life lessons in a way that both adults and children can understand.

One of the most heartfelt scenes in the film takes place when Mr. Jenkins explains accountability to Timmy after Timmy dismisses a big snafu in the film with his catch phrase ‘mistakes were made.”

“It was one of my favorite scenes to shoot… I would beat box with Craig in between takes,” Winslow said, laughing. “It was also a very hard scene to shoot. It took a few hours, but I think it turned out amazing.”

“I think Timmy did more listening in that scene than talking,” McCarthy added. “You could see Timmy the character hearing something for the first time and taking it in from a guy who he started to trust. I love that scene too, because I feel like we all have those people in life that say the right thing, at the right moment where we can actually hear it, grow from it and process it.”

Some of the other catch phrases present throughout the film: “normal is for normal people” and “Long Live the Wildcats, Misfits & Dabblers” serve as reminders to celebrate people’s unique differences instead of encouraging conformity.

“We’re better off as a society when people are different, weird, unusual and not normal,” McCarthy said. “The more we embrace, the more we grow, the more we learn, the more colorful our society is, and creatively, we’re all better for it. Embrace our differences… as Craig says, ‘you’re different, you’re weird and that’s good. ”

“I think if everybody was normal or the same, the world would be so boring!” Fegley added. “It’s good that we have people who stand out. Everybody can stand out and be different in their own way. I hope people take away that it’s ok to be different … you don’t have to be anyone you’re not. Timmy does a really good job at showing that, because he can’t be anyone but himself and he’s confident in who he is. Do what Timmy does.”

Enjoy the family fun for yourself! “Timmy Failure: Mistakes Were Made” is now streaming on Disney Plus.