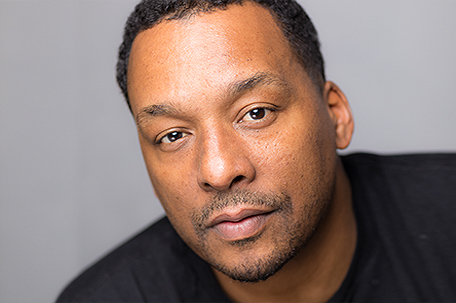 Deon Taylor is a boundary-crashing, envelope-pushing, unabashedly creative force in the world of film and television. In Hollywood, roles vary and job functions are often blurred and blended – for talent, creatives, filmmakers, storytellers, show runners, producers and high-level executives alike. Few people, if any, in Hollywood exhibit the capacity and multidisciplinary skill set necessary to bridge multiple functions and roles successfully. Taylor is one of the few who can – and does.

A prolific writer, filmmaker, director and idea generator, Taylor is a hybrid artistic force and savvy producer. His work is innovative, his writing is cutting-edge and his vision is distinctive. As a creator, he has forged his own unique path through Tinseltown and into theaters and onto TV screens, to the delight of audiences seeking fresh, original content with a unique voice.

Taylor succeeds because he’s always thinking outside the box — juggling projects with perfect aplomb while incubating ideas that others in the industry wouldn’t dare to pursue. Creativity and storytelling are the heart and soul of the global entertainment industry. With that mantra in mind, Taylor runs his own thriving, independent film and production company, Hidden Empire Film Group (HEFG), formerly known as Deon Taylor Enterprises (DTE), which he launched in 2000.

Taylor has written, co-written and directed dozens of films, TV series and special projects. HEFG produces a diverse array of larger budgeted projects, as the result of his boundless energy as a multi-hyphenate visionary and pioneer.

He successfully ventured into comedy in 2016 with his horror spoof “Meet the Blacks,” starring Mike Epps, George Lopez, Mike Tyson, Zulay Henao and King Bach. The film became a massive breakout hit and gained a cult following since opening in the Top Ten at the box office.

The popularity of “Meet the Blacks” led to a recently completed sequel, which Taylor also directed, wrote and produced. Due to hit theaters in late 2018, the sequel, titled “The House Next Door” stars comedy icons Mike Epps and Katt Williams, who last starred together in the hit “Friday After Next.”

All of his films have been financed by his longtime business partner and lead investor, Robert F. Smith, the founder of Vista Equity Partners, which is consistently ranked as one of the top Private Equity Firms in the world with approximately $3 billion in capital under management. Another partner is Roxanne Avent – a thought-provoking and visionary producer and executive with a powerful business aptitude, who steers HEFG.

Taylor has a background in marketing, sports and promotions. A Nike All-American basketball player from Gary, Indiana; he earned a biology degree at San Diego State University on a full basketball scholarship where he was named the conference’s “Newcomer of the Year.” He went on to play professionally and still competes weekly in the NBA Entertainment League out of Los Angeles.

Kam Williams: Hey Deon, thanks for the interview.

Deon Taylor: Hey!! Thanks for having me, Kam.

KW: What inspired you to write “Traffik?”

DT: The film was inspired locally, by my reading an email from my daughter’s school telling us that kids were being trafficked at the local mall. So, I took an interest in trafficking and began to Google and do research. I was surprised to find out that this was a rapidly growing epidemic all across the country. That’s what originally inspired me to write the screenplay. 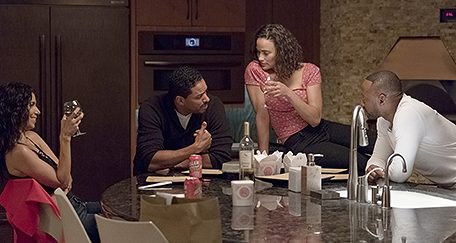 From left: In a scene from “Traffik”, Roselyn Sanchez, Laz Alonso, Paula Patton and Omar Epps.

DT: Informative… Intense… Scary… Funny… Dynamic… Heroic… It’s a movie that will shake you to the core, that does not play by the rules and which ultimately leaves you with valuable information you should know about trafficking.

KW: How did you go about assembling such an impressive cast?

DT: Assembling a cast was extremely hard, as an independent filmmaker. What I had to do was basically reach out to people… get phone numbers… push… drag…scream… cry… and beg. Anything to get people to listen to a pitch and to ultimately read the screenplay.

DT: To be vigilant about trafficking on a daily basis. Trafficking not only affects strangers’ lives, but it could touch yours, too. It could be as close as your next-door neighbor.

KW: You played basketball professionally before becoming a filmmaker. When did you develop an interest in movies?

DT: I loved films growing up, especially in junior high and high school, but I never gave any thought to becoming a writer or filmmaker until I was in Germany. Over there, I realized that I wanted to be involved with movies and I began by writing a screenplay, which I brought home with me. I figured it out on my own, and the bug just stayed with me for a long time. I just was like, “I gotta do this!”

KW: How do you explain your being so prolific?

DT: I don’t know how to answer that. I’m just trying to make films and do art and be the best me. I’m trying to figure out how do you create a world where you can constantly be a storyteller and get your projects out to the masses. I think what a lot of people are witnessing is, my passion, drive, and energy and the power of intention. My intent is to be successful.

KW: What is your earliest childhood memory?

DT: My earliest childhood memory is… I actually have a lot of them. Riding in the back of a 1978 Impala with zebra seats with my mom and my great uncle. And driving from Detroit to Gary, Indiana after my mom had just bought her first car. I just remember riding in the back seat. It’s an incredible memory for me.

DT: Be true to yourself. Don’t live for anyone else. Find your own path. Live your own life and be the best you, and everything else will fall into place.

DT: A flawed human who is trying to do right and be right and to lead by example versus words.

DT: That my family be prosperous and healthy for as long as possible.

DT: No one has ever asked my what’s my favorite ice cream, and I’m gonna answer it today. It’s a Dairy Queen Blizzard with M&M’s and chocolate syrup.

DT: If there was a way to get a house, like a flat, in Beverly Hills that would be incredible. I’ve just driven through that area so many times and looked at those houses and just wondered what it would be like to live there. I think that would be kind of cool.

KW: Harriet Pakula-Teweles asks: Is there a classic film you’d like to remake?

DT: There are several I’d love to remake: “Cujo,” “The Warriors” and “Cooley High.” I think one of the most fun to redo would be “Big Trouble in Little China.”

DT: Of course, I do. Freddie Kruger!

DT: Nothing! I’m a broke, struggling filmmaker trying to make it.

KW: Thanks again for the time, Deon, and best of luck with “Traffik.”

DT: Thank you so much, Kam.

To see a trailer for “Traffik,” visit: https://www.youtube.com/watch?v=oz-XiYNCo7o