Diamond White–precious Diamond sure does shine! 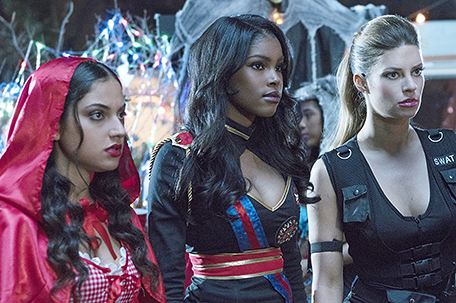 ABOVE PHOTO: From L to R: Inanna Sarkis as “Gabriella”, Diamond White as “Tiffany” and Hannah Stocking as “Anna” in Tyler Perry’s “Boo 2! A Madea Halloween.” (Photo by Chip Bergman)

Born in Detroit on New Year’s Day in 1999, Diamond White made a huge splash auditioning for Fox-TV’s “The X-Factor” at 13. She stunned judges Simon Cowell and Britney Spears and wowed the crowd with an unforgettable rendition of “It’s a Man’s World.”

That launched the multi-talented ingenue’s singing and acting career marked by memorable voicework on some of today’s most-popular animated shows: “Transformers: Rescue Bots,” Disney’s “The Lion Guard” and “Pinky Malinky.” She’s also been making live-action movies and, here, White talks about reprising the role of Tiffany in “Tyler Perry’s Boo 2! A Madea Halloween.”

Kam Williams: Hi Diamond, I’m honored to have this opportunity to speak with you.

KW: I just finished watching your original audition for “The X-Factor.” It literally left me in tears.

KW: Absolutely! It was especially moving because of Simon Cowell’s condescending tone towards you even before you started singing. It was like he was deliberately trying to make you nervous. I was touched that you still had the composure and confidence to bring your A game in front of that huge audience.

KW: Have you ever seen that video of James Brown and Luciano Pavarotti’s duet of “It’s a Man’s World?”

KW: You, of all people have to check it out. How did you come to try out for the show?

DW: I was dared to audition by one of my friends. So, when I went in, I wasn’t really worrying about whether the judges might be super-mean or super-intense. I was just there to have fun, and felt that whatever happened, happened.

DW: Yeah! And I actually had more fun making the second one, because I was less nervous about working with [director/co-star] Tyler Perry.

KW: Was it hard working opposite so many comedians?

DW: Not really. Whenever I’m in a room with funny people, I kinda just play off of them. My role here wasn’t to be funny. It was just to give people a hard time which I do naturally. [Chuckles]

DW: I have no idea. I’m not in the loop when it comes to that.

KW: Which do you prefer, acting or singing?

DW: Acting and singing go hand-in-hand. Whenever you sing, you act out a story, especially in music videos. Acting is a muscle I like to use while singing. I’d say I’m definitely an artist first.

KW: Who have you been listening to lately?

DW: I’ve been watching alot of SWV [Sisters with Voices] and Aaliyah videos.

KW: What are you working on, musically?

DW: Tomorrow, I’m releasing the video for my song “Cleopatron.” And I’ll be dropping a new single every month until I go on tour later this year. They’re all written by me. No fake songs. So, I’m letting people inside my head.

KW: In terms of acting, do you prefer live-action or voiceover work?

DW: I’m a really big fan of cartoons, and I’ve been doing animation for awhile, but I’ve got to say live-action because there’s a lot more going on. And it’s more fun to be able to watch as well as listen to myself, even though sometimes I hate what I look like.

KW: And do you prefer doing TV or film?

DW: Film! I really want to get into indy films and play some riskier characters. It’s been a dream of mine to do an action film where I get to kick some butt. 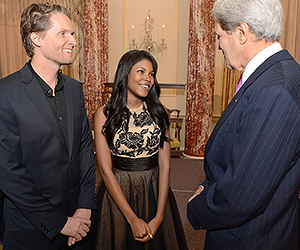 U.S. Secretary of State John Kerry speaks with musicians Toby Gad and Diamond White at the World at an event in recognition of World Refugee Day at the U.S. Department of State in Washington, D.C., on June 20, 2013. [State Department photo/ Public Domain]

DW: I really like Gucci, but not very expensive things that take away paychecks. Sorella’s really nice, too.

DW: The day a classmate painted on my Juicy Couture blouse at school. That was the day I realized I was a bourgie kid. I was about 5. My mom got mad and complained at the school like Madea.

KW: What is your favorite food to eat?

DW: That’s a very interesting question. At home, I’m really to myself. I can write in my journal and listen to music for hours. I like to be social, but some people are scary. So, I have to kinda prepare myself mentally to be on the carpet. Once I’m in that frame of mind, red carpets are easy.

DW: I see a human who’s always changing. I never see the same person twice, because there’s always something different going on in my head. But I’ve always seen a strong black girl in the mirror since I was little.

KW: Has that strength served you well in your career?

DW: In the film industry and in the music business, you don’t see many dark-skinned females being shown in the light they deserve. I’m hoping to change that because how we’re represented is really important. That’s something I carry with me all the time.

KW: Do you have a generic question that I could ask other celebrities?

DW: I have a good one. Ask them to share a thought that they’ve never even put on paper?

DW: It’s always the simple questions, like: How are you feeling today? No one ever asks: how are you actually doing?

KW: Well, how are you doing?

DW: The Demogorgon on “Stranger Things.”

DW: I think anyone who’s creative is definitely a little crazy. It’s tough to be courageous enough to pursue a wild idea.

DW: Auditioning for X-Factor. But I still do something crazy everyday.

DW: I hate using the word “famous.” I don’t think it means much anymore, because there are so many people all over the internet who are famous for no reason. I see myself as successful. It’s always been a goal of mine to buy my mom a house in L.A. that’s ten times better than our home in Detroit that burned down.

DW: She wants to be in Calabasas. But some parts of Calabasas are apparently very ratchet [i.e., ghetto] now. And I can’t have her living in a bad area.

DW: Have a goal, but don’t have a fixed plan on how to get there. Be flexible and make smart choices, because you don’t want to see yourself in a bad light.

DW: I don’t have a wallet. I just have my driver’s license, a credit card, my allergy medicine and a few dollars in the bottom of my backpack. [Laughs]

KW: Thanks again for the time, Diamond. I look forward to speaking to you again soon. .

DW: Me too, Kam. Thank you soooooo much!

To see a trailer for “Boo 2! A Madea Halloween,” visit: https://www.youtube.com/watch?v=feRTw6OK_Ks

To see Diamond White’s audition performance of “It’s a Man World” on “The X-Factor” at just 13 years of age, visit: https://www.youtube.com/watch?v=VGVZ82AEaWo

To order a copy of “Boo 2! A Madea Halloween” on Blu-ray, visit: https://www.amazon.com/exec/obidos/ASIN/B077XG5H29/ref%3dnosim/thslfofire-20