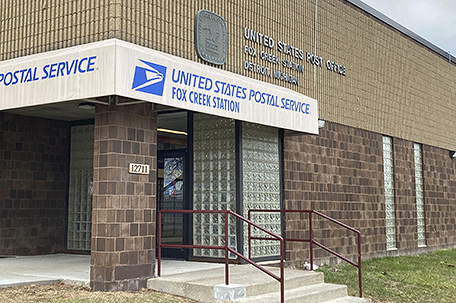 ABOVE PHOTO: The Fox Creek Station post office is about five miles east of downtown Detroit, Friday, Jan. 8, 2021. President Donald Trump has signed a law that names the post office, for Aretha Franklin, who died in 2018. “No matter where life took her, Aretha never forgot about her hometown of Detroit,” said U.S. Rep. Brenda Lawrence, a Detroit-area Democrat who sponsored the bill. (AP Photo/Ed White)

DETROIT — Aretha Franklin was given a bit of posthumous R-E-S-P-E-C-T on Monday when a post office in her hometown of Detroit was named after the late singer.

Members of Franklin’s family as well as postal and elected officials visited the former Fox Creek post office to celebrate the name change honoring the Queen of Soul.

“Her legacy lives on in her music, in her family. But we have added to that list of her legacy: A post office with her name on it,” said U.S. Rep. Brenda Lawrence, a Michigan Democrat and longtime postal service worker.

Lawrence also was a friend of Franklin’s and introduced the bill in Congress that resulted in the name change.

That legislation, which was signed by former President Donald Trump in January, sailed through Congress, U.S. Sen. Gary Peters said.

The post office is located about five miles east of downtown and not far from a concert amphitheater on the Detroit River that also is named for Franklin. It now will be known as the “Aretha Franklin Post Office Building.”

Franklin died in 2018 at age 76 in her Detroit home. A number of the songs she recorded during a legendary career, including “Think,” “I Say a Little Prayer” and “Respect,” are considered classics.