Detroit 1967 riots broke out in the wee hours on July 23rd, in the wake of a police raid on an unlicensed bar where folks had been toasting a couple of vets who’d recently returned from Vietnam. Word spread like wildfire through the Black community that the cops had arrested all 82 people they found inside, and it wasn’t long before mobs began looting and firebombing stores all around the “hood.”

The rebellion would last five days, and result in over 1,000 injuries and 7,000 arrests, while also claiming 43 lives. In terms of property damage, about 2,500 businesses were destroyed and hundreds of families were left homeless. 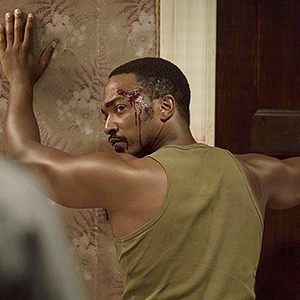 Anthony Mackie in a scene from the crime drama, “Detroit”.

The insurrection was quelled by the Motor City’s police force in conjunction with Michigan’s National Guard as well as with federal troops from the 82nd and 101st Airborne divisions. While the arrests at the speakeasy ostensibly served as the flashpoint for the civil unrest, the revolt was really the result of long-simmering frustrations with the poor quality of housing, employment and education in the ghetto.

Directed by two-time Oscar-winner Kathryn Bigelow (“The Hurt Locker”), Detroit revisits the ‘67 riots by telescoping tightly on events which unfolded at the Algiers Motel on the third night of the rebellion. The picture features an A-list ensemble that includes: John Boyega, Anthony Mackie, Will Poulter, Jacob Latimore and John Krasinski.

The trouble started when a sniper seemed to be taking pot shots at the police stationed a block away from the Algiers. Truth be told, it was just 17 year-old Carl Cooper (Jason Cooper) firing a harmless starter pistol.

Nevertheless, reasonably assuming they were under attack, officers returned fire before storming the hotel’s three-story annex. Emptying the rooms, they found a dozen guests, two 18 year-old white girls and 10 Black males, including members of The Dramatics, The Motown group whose biggest hit many years later was “Whatcha See Is Whatcha Get.” 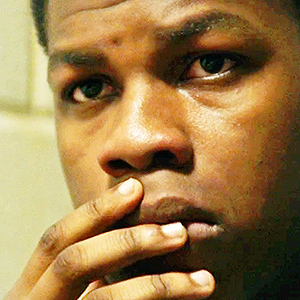 John Boyega a in scene from the crime drama, “Detroit”.

The guests were herded into a first-floor hallway where, over the next several hours, they were threatened, humiliated and sadistically beaten during a prolonged interrogation being directed by Patrolman Krauss (Poulter). The White females were stripped naked, and called “whores” and “[N-word] lovers.”

No gun was ever found, but by the end of the torture three Black teenagers lay dead: Cooper, Fred Temple (Latimore) and Aubrey Pollard (Nathan Davis, Jr.). Newspapers reported that they were snipers who died during an exchange of gunfire. But autopsies revealed each had been shot from behind at very close range.

“Detroit” is very difficult to watch, since it’s basically a searing snuff flick which forces the audience to witness the deliberate persecution of innocent civilians at the behest of a racist redneck with a badge. Riveting revisionist history setting the record straight in a way which will undoubtedly resonate with the Black Lives Matter Movement.

To see a trailer for Detroit, visit: https://www.youtube.com/watch?v=HFeWsDpy9y0