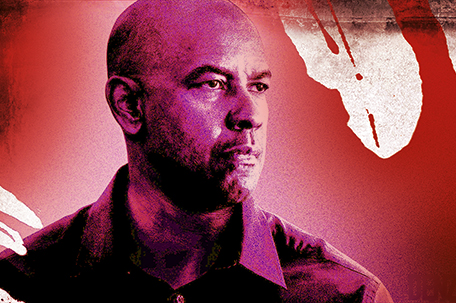 The Equalizer makes its world premiere at the upcoming Toronto International Film Festival next month. Sony Pictures releases it Stateside on September 26, 2014.

The reportedly $50 million project is said to be designed to launch the first film franchise for Washington – hence, if this first film does well, expect sequels. One has already been greenlit, even though the first film hasn’t been released yet. As previously noted, it’s said to have scored particularly well with test audiences.

McCall is a solitary, ex-special ops, monastic figure who despises injustice and devotes himself to helping victims of crime. Working at a small home improvement store by day (Home Mart), in his off-time at a local diner, he befriends a girl, Teri (Moretz), who is nearly killed by gangsters. After an initial battle, he learns they are members of the Russian mob, leading him to wage a one-man war against them and their partners in crime.

In June 2010 it was announced that Russell Crowe was looking to bring The Equalizer to the big screen directed by Paul Haggis, with Crowe attached to play Robert McCall.

In December 2011, it was reported that Washington was set to star in the title role.

Fuqua came on board to direct on March 21, 2013, reuniting the two from their successful collaboration on their 2001 Oscar-winning film Training Day. Moretz was announced as co-lead to Washington on May 10, 2013. On May 31, 2013, Leo was then cast in the film, Leo previously worked with Washington in the 2012 film Flight, and Fuqua in Olympus Has Fallen (2013).