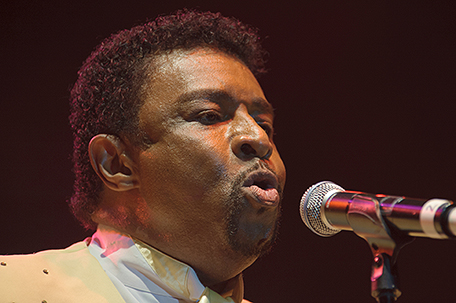 ABOVE PHOTO: Dennis Edwards with The Temptations Review performs at Thunder Valley Casino Resort in Lincoln, California on June 8, 2012.  Edwards died last Thursday after a long illness.  He was 74.  (Editorial credit: shutterstock.com)

DETROIT — Dennis Edwards, a Grammy-winning former member of the famed Motown group The Temptations, has died. He was 74.

Edwards replaced founding member David Ruffin in 1968, and his soulful, passionate voice defined the group for years. A member on and off for about two decades, he was part of the lineup that released hits “Ball of Confusion (That’s What The World Is Today), “Cloud Nine” and the chart-topping “Papa Was A Rollin’ Stone.”

He possessed a “voice for the ages,” with great range, energy and artistry, Paul Riser, a Motown arranger and musician who worked with Edwards during the label’s Detroit heyday and on subsequent projects, told The Associated Press. “That voice was just flat-out outstanding — very well-defined.”

Edwards was inducted into the Rock & Roll Hall of Fame with the rest of The Temptations in 1989.

In the 1990s, a federal judge barred him from performing under his former band’s name. Otis Williams, the band’s lone original member, sued Edwards for trademark infringement after he had used variations that included “The New Temptations.” He was allowed to use “The Temptations Review featuring Dennis Edwards,” and performed under that name for nearly two decades, according to Roberts.

“He is now at peace, and our love and prayers go out to his family,” Williams said in a statement Friday. “At this moment and always, we acknowledge his extraordinary contribution to The Temptations legacy, which lives on in the music.”

Motown star Smokey Robinson said in a statement that he was saddened “that another Motown soldier is gone.”

“Rest in Peace my brother,” he said. “You were a great talent.”

Born in Birmingham, Alabama, Edwards lived near St. Louis with his wife, Brenda. He would have turned 75 on Saturday.