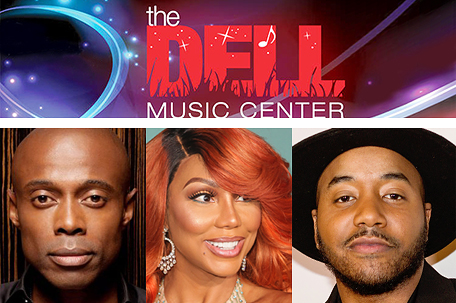 The Dell Music Center’s 2018 Essence of Entertainment Concert Season opens Thursday, July 5th with three music sensations: R&B performers Kem, Tamar Braxton, and Damien Escobar. Tickets for the 2018 Essence of Entertainment season will go on sale Saturday, May 19 at 10am. Information about tickets for individual shows can be obtained at the Dell Music Center’s new website: www.TheDellMusicCenter.com or Ticketmaster.com.

The Dell Music Center is a world-class amphitheater located in East Fairmount Park. The Dell is a cultural treasure offering top-notch amenities and quality entertainment at a fraction of the cost of comparable venues.

The 2018 Essence of Entertainment lineup features the following performers:

In addition to the Essence of Entertainment concerts, the 2018 Dell Music Center line-up will include the following shows and events:

A viewing of the “Black Panther” film on August 21st- “Black Panther” is a 2018 American superhero film based on the Marvel Comics character of the same name. Produced by Marvel Studios and distributed by Walt Disney Studios Motion Pictures.

PHILADANCO! The Philadelphia Dance Company, long recognized for artistic integrity, superbly trained dancers and electrifying performances, will again grace The Dell stage July 27th.   Founded in 1970 by Joan Myers Brown, PHILADANCO has a legacy of breaking barriers and building bridges across cultural divides.  The Dance company consistently performs for audiences that represent a blend of people from diverse communities.  Part of their mission is to development and empower youth with leadership  skills that facilitate achievement and success in the world of dance and everyday life.

The Black Pearl Chamber Orchestra (BPCO) will return to The Dell this summer. Under the leadership of award-winning Music Director Jeri Lynne Johnson, BPCO performs classical music in a way that reflects the ethnic, age and gender diversity among its musicians while also fostering community engagement.