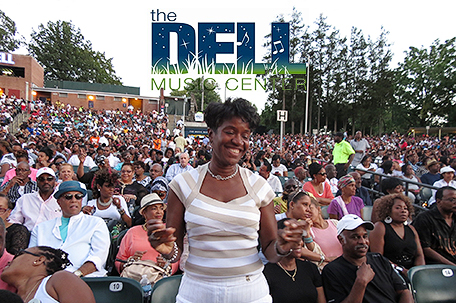 Patty Jackson “Queen of The Dell” and more speak about the Dell concert series. “I miss the people.”

It was supposed to be another great season for the enthusiastic concertgoers who faithfully attend shows at The Dell Music Center in North Philadelphia, also known as the place  “where the stars take center stage.”

However, as season ticket holders and others looked forward to another great season this year, a big problem interrupted everybody’s plans to purchase tickets, put on that great outfit, sit in that affordable seat, and dance and sing along with the performers every week.

When Mayor Jim Kenney shut down the City of Philadelphia, all Philadelphia schools and businesses during the week of March 8, 2020, people started thinking about if there would be any entertainment places that would be open during the summer during this pandemic. Their thoughts then turned to one of their favorite music venues — The Dell Music Center.

I’ve always said that The Dell was “one happy place.” It was somewhere you went on a Thursday night during the summer months and enjoyed your favorite singers, met with longtime friends and enjoyed an atmosphere that had a great feel for its mature crowd.

It is the fourth largest outdoor venue in Philadelphia. It holds 5,944 people, including lawn seats. The amphitheater is beautiful, which is another reason why it’s so treasured.

However, the Dell’s fans would receive bad news from Mayor Kenney again during the week of July 13, when due to the continuing COVID-19 crisis, he canceled all crowd participation and attendance of large gatherings throughout the city, which included professional sporting events and entertainment venues in the city.

The health and safety of people was the most important concern. And with some people around the city not practicing social distancing and wearing masks, the consequences of large gatherings could be catastrophic as the number of positive COVID-19 cases, hospitalizations and deaths continue to devastate the city and country.

It’s been a tough pill to swallow for the city’s residents. I had the opportunity to speak with concert goers, giving them a chance to reminisce and talk about what The Dell Music Center means to them.

Some of the entertainers that have graced the stage at The Dell over the years that fans will have to wait to see again are: Patti LaBelle, Frankie Beverly & Maze, The O’Jays, The Whispers, Gladys Knight, saxophonist Pamela Williams, Peabo Bryson, Stephanie Mills, Babyface, Johnnie Gill and Sheila E., just to name a few.

From the performers to The Dell’s managers — Susan Slawson and Faye Greene — to the ushers, security, concession stand workers and the ticket office, all have made it a special place for many.

The closure of The Dell was particularly hard for Bill Ingram and his Platinum Productions organization, who provides promotion services for the quality performers who entertain people around the Tri-state area.

“It really hit us hard this year,” Ingram, president of Platinum Productions, said. “The Dell is an institution for people of color. Sometimes in this climate, we need that outlet to take your mind off of everything else that’s going on. Unfortunately, because of the pandemic and the social distancing rules, you know, The Dell won’t be open.”

“We’re looking at other ways to make and keep The Dell and Platinum relevant,” Ingram added. “If by streaming stuff, Platinum Products looks to partner with The Dell and the hope to keep Platinum and The Dell relevant. How great would it be to have this service in place for our loyal concertgoers?  It’s our “Cheers,” where everybody knows your name.”

I spoke with Faye Greene, The Dell’s operations manager, about the situation the ongoing pandemic has created for them and the passionate fans of The Dell who were looking forward to some great shows.

“With The Dell being closed this year, it is our goal to keep this city treasure maintained and ready for Philadelphians and the surrounding areas to return,” she said.

WDAS FM 105.3 radio personality and host of the concerts at The Dell, Patti Jackson — also known as the “Queen of The Dell” — shared what she misses most, but is encouraged that they will be back.

“I’m missing people,” she said. “From the top of the hill and people in the audience, I miss. Greeting those people and seeing them, it was like family. Playing cards, the barbeque, and everybody having a good time. Because of the Thursday tradition, it felt like you were at a family reunion. You get to see everybody and everybody is excited, because they’re gonna see a good show. They’re gonna see something that they’re gonna talk about the next day.”

“I would get such a kick going out on that stage because you see the familiars, the first-timers, the dancers come out there to out dance each other,” she continued. “But you know, between the show, there was the show, with Gary O playing and everybody out there dancing and having a great time. It was a party where a mature crowd of African-Americans could come, but anybody could come [as well] and it was unlike any place that you’ve ever been. They come to The Dell and feel at home and that’s what The Dell brings.”

Jackson also had her own concert at the Dell titled, “Party In The Park with Patty Jackson” which was held during her birthday weekend. She would bring her favorite acts like The O’Jays, The Whispers, Frankie Beverly and Maze, Keith Sweat, and Ralph Tresvant, who had the “Gen Xers” lose their mind during his show, SWV, who is a crowd pleaser, and Babyface, just to name a few.

“I cannot wait to walk back on that stage and greet that crowd,” Jackson said. “I cannot wait [until] the day that I can announce that tickets are going on sale, who is coming and that moment [that] I think that next season is going to be on  fire, because we’re all gonna realize it was COVID-19 and how much all missed each other.”

DJ Gary O, who began as the house DJ five years ago, is reflecting about his time there and what he misses about entertaining the crowds at The Dell.

“Well, you miss the energy,” he said. “Energy, and seeing people’s vision of fun — smiling and just putting all of their problems aside and having to enjoy the whole atmosphere at The Dell. And at The Dell, there is no down time. That’s the difference between any other venue you go to or any other concert you go to. You walk in the door to music. You go to the next group and there’s music, you go between groups and there’s music, so our energy level is totally generated toward the venue.”

“Well, you know, I miss but you have to understand,” he continued. “I’ve done a lot of major things in my career. I had the biggest clubs in Philly. Missing it is not a major thing for me. I’m doing live mixing, so I’m fulfilling people’s passion of having a good time with DJ music. I do four mixes a week live on my Facebook page. So, it ain’t the concert. It helps them a lot. For me to take their minds off of some things and I give them a party.”

“I miss it, but I rather people be safe,” DJ Gary O concluded. “When COVID-19 hit, I knew [that there] wasn’t going to be concerts, because people were going out too fast and the virus is still spreading.  [There] probably won’t be [any] concerts until next year. I was a major part of The Dell. It’s not just the acts, it’s a party. A party on Thursday and you don’t have to go out on the weekend. It was a beautiful thing that was created by Bill Ingram of Platinum Productions. He’s the one that brought me in and said, ‘we need music.’”

Lady B., the great radio personality from Classix 107.9 FM, was another host of The Dell series. She created her own concert titled, “Lady B’s Basement Party” that brings back favorite rappers and hip hop rap groups from the 80’s and 90’s that were an essential part of The Dell’s summer lineup.

“I miss just connecting with people,” she said. “It was a fun filled time for me to connect with my listeners. I take as many pictures as I can and I give out a bunch of hugs, as many as I can. It’s just a feeling of connecting with people. You know, my fellow Philadelphians and [I] share the same passion for music, and a time to let our hair down in a family [oriented], fun place.”

“You can bring your children,” Lady B concluded.  “I miss seeing all of that. I miss seeing the families gather and just having a great time. As you know, I grew up in The Dell. I’ve been running up and down that hill before they had them golf carts. Mary Mason used to run me up and down the hill at the age of 18. I feel like it’s our second home, because I grew up there. This would have been my 39th anniversary [in radio] party. I’m surely gonna miss celebrating my milestone with my audience. God willing, we’ll be able to do my 40th anniversary, if this is over before next summer.”

I also spoke with some season ticket holders, faithful concertgoers and fans of The Dell.

“I haven’t been to The Dell in over two years,” Donna O’Day, a fan from West Philadelphia, said. “[However], I liked a lot of things at The Dell. I liked the artists that were there and I liked it because it was for older people our age and it wasn’t a kid thing. It gave us something to do. I was partying like I was crazy.”

“I like The Dell because people all over the city, suburbia and the tri-state come and enjoy the music,” Jay Dempsey of New Castle, Delaware said. “I don’t have a favorite artist. I like all of them. They always seem to amass a great lineup.”

The Dell may be down now, but it will be the place we call ours when it opens again.