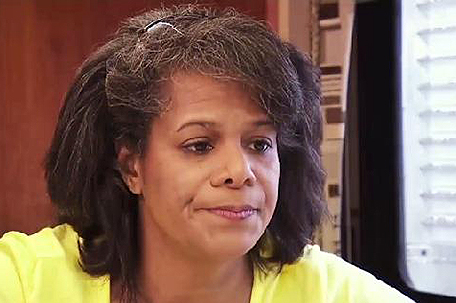 ABOVE PHOTO:  Debi Thomas in a scene from OWN’s ‘Iyanla Fix My Life’

‘Iyanla Fix My Life’ traveled to a small town in Virginia to work with the former Olympian.

Thomas, in case you forgot or didn’t know, was an Olympic medalist who went on to become an orthopedic surgeon. But her life took a turn for the worse. Divorce, unemployment and bankruptcy left her living in a bug-infested trailer with her fiancé and his two young sons.

Iyanla traveled to a small town in Virginia to work with the former Olympic figure skater. But while working to get a better understanding of what went wrong, Iyanla realizes that Thomas, 48, may be her own worst enemy. The two have a deep discussion about Thomas’s personal triumphs and tragedies, as well as her failed relationship with her son.

While standing outside her trailer home, Thomas leans on Iyanla for support during an emotional breakthrough.

“You don’t have to do it by yourself this time,” Iyanla tells Debi. “And you didn’t do anything wrong.”

“I did the best I could,” Debi says. “I feel like I’m hurting people that I care about.”

Iyanla tells Debi that the person she’s hurting the most is herself.

“You can’t help anybody until you can help you,” Iyanla says.

For rebroadcasts of ‘Iyanla Fix My Life’ on OWN Network; check local TV/cable schedules for times and channels.