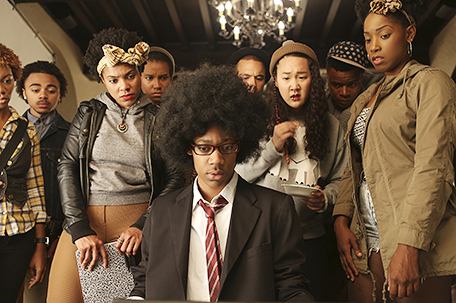 Outspoken filmmaker Sam White (Tessa Thompson) displays fervent tenacity in her attempts to raise hell for the greater good of her African American peers through repertoire that includes controversial college radio show ‘Dear White People.’  She struggles with the duality of being biracial and maintaining a relationship with beau Gabe (Justin Dobies).

Preppy politician who moonlights as a Trekkie, Troy Fairbanks (Brandon P. Bell) battles both sides of the fence, trying to gain the respect of the affinity group Pastiche and handling backlash over his white girlfriend Sophie (Brittany Curran) from his black counterparts.

Colandrea ‘Coco’ Conners (Teyonah Parris) desperately attempts to erase her ‘ghetto’ background in an effort to make a name for herself, becoming a whitewashed, lost black girl who faces a harsh reality.

And freshman journalist Lionel Higgins (Tyler James Williams) is the homosexual awkward black kid in search for a place and a voice at the university, also dealing with white girls touching his hair.

Behind the gates of prestigious Winchester University resides a race problem that unsubtly gets brushed under the proverbial rug.  Dear White People follows the lives of four very different black students coping with life, relationships, and education at an Ivy League school.

Writer and director Justin Simien makes his debut and strikes black gold, examining being African American in a white world.  Dear White People serves as a hilarious, blunt and uncomfortable conversation that is long overdue.  From hairstyles to the quota of black friends, this film expertly brings numerous eluded racially charged issues to the forefront of white psyche.

Black versus white is not the only theme presented.  There is also a full deconstruction of black culture yet to be seen in cinema.  Through gritty and fresh writing, all characters are complete with their own complications that are easily relatable, becoming individual lenses into various personality traits.  Even Dean Fairbanks (Dennis Haysbert) offers an administrative point of view balancing respect of the black students and racism from colleagues.

Some scenes are reminiscent of Spike Lee’s classics Do the Right Thing and School Daze with a few touches of She’s Gotta Have It revamped for a millennial mindset.  With Kathryn Bostic’s music on the soundtrack, she should be applauded as it is subtle and smart.

Go see this movie if you are black and went to an HBCU, a predominantly white institution, or know what it feels like to be the token black person/spokesperson.  And take a white person with you for the squirm factor.

Rated R for language, sexual content, and drug use