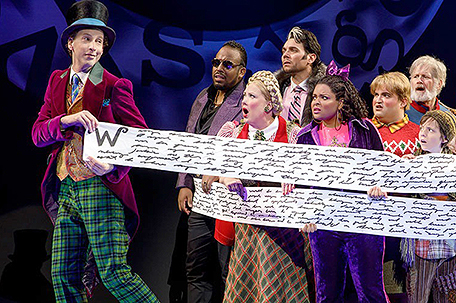 ABOVE PHOTO: The cast of Roald Dahl’s “Charlie and The Chocolate Factory”

Raised in Maryland right outside of D.C., David Samuel began his journey into the world of acting in his late teenage years. After failing at chemistry three times, he realized that a career as a doctor was not in the stars. Samuel then moved forward with his passion for the theater, which lead him to study the art formally, receiving his MFA in Acting from Brown University/Trinity Repertory Company.

He eventually made the move to New York and began pounding the pavement auditioning. Although Samuel is not new to the theater world, he is fairly new to musical theater as a profession. Samuel spoke with the SUN about his journey to pursuing musical theater, and the road that led to him landing the role of “Mr. Beauregarde”in the first national tour of Roald Dahl’s “Charlie and The Chocolate Factory.”

“I started doing musicals professionally this year,” Samuel said. “When I studied musical theater in college, I had this secret dream to be in musicals. When I went to my local library, I found the original Broadway cast recording of “In The Heights.” I write music, I rap and I sing. I played this recording in my car as I would drive to college in the morning. My parents are Ethiopian and they immigrated here. So hearing the whole first generation American tale really resonated with me…. and the fact that they were singing appealed to my musical interests and really stuck out to me. I’m listening to it and I’m crying in my car thinking, ‘this is amazing… how do I do something like this?’”

“Charlie and The Chocolate Factory” tells the story of Charlie Bucket, his grandfather, and the colorful characters and fellow contest winners he meets on his journey through Willy Wonka’s factory. After only two auditions, Samuel landed the role of Mr. Beauregarde. He spoke about his perspective on playing the father of the iconic character, Violet.

“It’s the story of this father who wants his daughter to be a star. He creates this life for her and makes sure that she’s set up to be financially stable forever.

He also wants to get a little shine on his end so he can look good. I committed to the idea that he cared about his daughter and loves her, just as much as he cares about promoting her brand and popularity on social media.”

The national production of “Charlie and The Chocolate Factory” takes bits and pieces from the book, the Gene Wilder film and the Johnny Depp film in a way that will still resonate and connect with people. Samuel discusses some of the differences in this national tour adaptation.

“The Beauregardes are Black and there were no Black families in the original film. That alone – that representation I think is important,” Samuel said. “The thing I have to remind myself is that the story centrally is about Charlie, Willy Wonka and this young boy with imagination, dreams and hopes who want to create a better life for his family and pull them out of their desperate situation. What we begin to understand the more we continue to do this musical, is that these characters portray some of the excess of life. It’s the balance of that storytelling, of showing that there are people who live this way and there are people that live a different way, who operate with their hearts and operate with the best of intentions. Hopefully that’s what we take away from the musical… that love, compassion, caring for others and seeing the possibilities in the world can be rewarded and carried forward, especially in this current place that our country is in.”

“Charlie and The Chocolate Factory” is a story about hope and possibility, imagination, the beauty of childhood and the importance of family. Samuel shared his hopes for what the audience will experience after seeing this show.

“The thing I hope the audience walks away with it is that they can walk out into the world and imagine something greater than what’s there, and be able to see something when all the possibilities seem hopeless. Charlie has a couple of songs in the show and then there’s a scene where he’s just imagining things. He’s imagining things where if you hear it from a child, it sounds ridiculous.

Those children who are able to imagine and see the world, become our leaders, and become people who are able to bring positive energy to the world and lift others up. I think both adults and children can take that home with them. The world is the way it is now… but we can imagine something totally different within our power, within our minds and that’s a beautiful thing.”

Keep up with all things David Samuel by visiting his website at: www.kingofaxum.com or by following him on Instagram at: @kingaxum. “Charlie and The Chocolate Factory” will be at The Academy of Music from November 6th through November 18th. Visit https://www.kimmelcenter.org/ for more information on tickets and showtimes.