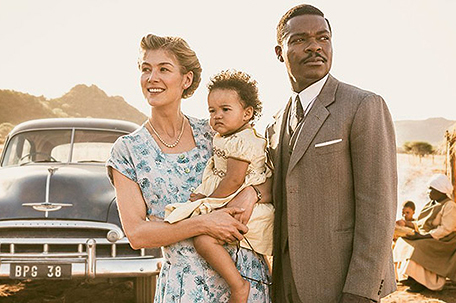 ABOVE PHOTO:  Rosamund Pike and David Oyelowo as Seretse Khama, the King of Botswana and his wife Ruth Williams in the biopic ‘A United Kingdom’.  (Photo: Fox Searchlight)

David Oyelowo is a multiple Golden Globe and Emmy-nominated actor and producer who has quickly become one of Hollywood’s most sought-after talents.

Later this year he’ll be seen in the third film in the Cloverfield horror franchise, and as the lead in the as-yet untitled Nash Edgerton film, co-starring Charlize Theron, Joel Edgerton, Thandie Newton and Amanda Seyfried.

Most recently, he starred opposite Lupita Nyong’o in Mira Nair’s “Queen of Katwe,” earning a NAACP Image Award nomination for Outstanding Supporting Actor in a Motion Picture. And his additional film credits include ‘Interstellar’, ‘A Most Violent Year’, ‘Captive’, ‘The Butler,’ ‘Lincoln’, ‘Middle of Nowhere,’ ‘Jack Reacher,’ ‘The Paperboy’, ‘Red Tails’, ‘The Help’ and ‘The Last King of Scotland’.

On the small screen, David starred in the HBO film, “Nightingale,” earning a Golden Globe nomination for Best Performance by an Actor in a Limited Series or Motion Picture Made for Television. He has collaborated with HBO on several other occasions, including a starring role in Kenneth Branagh’s 2006 production of “As You Like It,” in which he played “Orlando” opposite Bryce Dallas Howard; and as the lead in the mini-series, “Five Days,” for which he won a Satellite Award for Best Actor in a Miniseries or a Motion Picture Made for Television.

In 2008, he starred in the critically-acclaimed adaptation of the Alexander McCall Smith novel, “The No.1 Ladies Detective Agency,” which was directed by the late Anthony Minghella. He appeared in ABC-TV’s 2008 Golden Globe-nominated production of “A Raisin in the Sun,” too, alongside Sanaa Lathan, Sean Combs and Phylicia Rashad.

A classically-trained actor, David recently appeared opposite Daniel Craig as the title character in the New York Theatre Workshop off-Broadway production of “Othello.” He got his start on stage in 1999 with The Royal Shakespeare Company. He garnered national recognition for his performance as King Henry VI in the RSC’s 2001 production, when he was cast as the first Black actor to play an English king in a major production of Shakespeare. The performance won David the 2001 Ian Charleson Award, which is presented in recognition of the best classical stage performances in Britain by actors under the age of 30.

Here, he talks about his latest outing opposite Rosamund Pike as an African king who falls for a British commoner in “A United Kingdom.”

Kam Williams: Hi David, thanks for another interview. I really enjoyed the film.

DO: The fact that it was a story I felt I should know, but I didn’t know. And as I dug deeper, I appreciated the enduring love that Seretse and Ruth had for each other was a wonderful story.

KW: After I watched the film, I went home and looked up their story as well as the history of Botswana, since I’d known nothing about either.

DO: One of the amazing things about this experience for me has been the Google trail. There’s so much to learn about them and African history.

KW: I appreciate Amma Asante making a movie like this because when I grew up, the only movies about Africa I saw were Tarzan movies. So, I grew up rooting for Tarzan and thinking all Africans were cannibals. It reminds me of how a Native American friend says he grew up identifying with the cowboys and hating Indians because of how he’d been brainwashed by Westerns.

KW: Editor/Legist Patricia Turnier asks: Did you speak to Ruth and Seretse descendants in preparation for the role??

DO: Yes, and we even shot on location in Botswana.

KW: Patricia observes that, unlike many other actors, you have managed to avoid being typecast. She asks: what is your secret?

DO: Becoming typecast is something that can happen very easily, if you are not paying attention. Look, the fact of the matter is that Seretse and Dr. Martin Luther King [in Selma] makes it twice in a row now that I’ve played historical, political figures. I’ve got to be mindful of that going forward, despite how much I admire both of these men. You’ve got change it up to have a long career. So, I won’t be playing that sort of role in the near future.

KW: Since she’s French-Canadian, she’s also wondering whether the movie will be translated into other languages and if it will be showcased at Cannes

DO: It won’t be showcased at Cannes, because it’s already been released. But, yes, it will be distributed internationally, in Canada, France, Botswana, Italy, Germany and many other countries.

KW: How was it working opposite Rosamund Pike? How do you explain the great chemistry the two of you generated on screen?

DO: I had been working on the film for a long time, and it was important to find an actress who shared my passion for the project. When I sent Rosamund pictures of Seretse and Ruth, she had such an emotional and visceral reaction to them, it really gave me a lot of confidence that we would be bringing everything we could to the work. And I think that passion for the project led to the chemistry you see onscreen.

KW: This year, the Academy nominated seven actors of color for Oscars after not nominating any the previous two years. But that must be little consolation to you, since your terrific performance in Selma as Dr. King was snubbed.

DO: Well, thank you, but films are for life. Even with what happened with Selma, everywhere I go, people have seen that film. And at the end of the day, that’s why you do it. with the passage of time, no one really remembers who was nominated or who won, it’s the film that has to stand on its own two legs. i’m very proud to say that I feel we achieved that with Selma.

DO: [LOL] Well, I’m a lot sillier at home. I have four kids and a very rowdy house.

KW: What is your favorite dish to cook for the kids?

DO: Being of Nigerian descent, I like to make fried plantains. It was a staple of mine growing up, and it’s a big favorite in our house.

DO: [Laughs again] A favorite movie monster? Gosh… I have to say I was very intoxicated by King Kong growing up. I had one of those rubber King Kong dolls with stretchy arms, and I would play with it for hours.

DO: I always think it’s a bad idea remaking classics. I’m of the mind that it’s best to leave them alone unless you have a very, very fresh point-of-view which is almost never the case.

KW: The Sanaa Lathan question: What excites you at this point in your career? I see you have an untitled project with Nash Edgerton coming up.

DO: Yeah, that’s an action-comedy, which is a very different speed for me. I really loved doing that film. Speaking of avoiding being typecast, I really want to try my hand at some different genres. Action is something I love to watch, and I’ve had fun whenever it’s come my way. Rosamund and I met doing an action-thriller [Jack Reacher]. I really enjoyed that experience, and would love to do something like that again. Comedy is something else I enjoy watching, and would love to do. So, the idea is to just keep mixing it up.

KW: You also have God Particle coming up with Gugu Mbatha-Raw and Chris O’Dowd. What’s that about?

DO: It’s a sci-fi that J.J. Abrams is producing and a wonderful, young director named Julius Onah is directing. As i’m sure you know, because it’s a J.J. Abrams project, if I reveal any more, I’ll be shot in the kneecaps. [Chuckles]

KW: Super 8 is my favorite J.J. Abrams movie. Have you seen it?

DO: Yes, he’s a very special filmmaker. And we’ve really pushed the envelope with God Particle which is coming out in October.

KW: What’s the craziest thing you’ve ever done with your kids?

DO: Taking them skiing. They thought they’d mastered it before they really had, so they started doing all these crazy jumps and things. They were incredibly good at it, and everything turned out fine, but it got a little hairy there for a second.

DO: When I’m at home with my wife and kids, slumped on the couch, watching a movie or laughing together.

DO: I’d love to have Sidney Poitier, Daniel Day Lewis, Denzel Washington and Sean Penn over.

DO: I would probably choose time-traveling, so I could go back and change some of the fashion choices I’ve made.

KW: Attorney Bernadette Beekman asks: If you could go back in time, what advice would you give your 13 year-old self?

DO: When I was younger I couldn’t wait to be older. I would say, “Slow down!”

KW: Bernadette also asks: What is your favorite charity?

DO: The GEANCO Foundation which provides scholarships for Nigerian girls who have been victims of Boko Haram.

DO: As someone who helped people.

KW: Thanks again for the time, David, and best of luck with “A United Kingdom.”

DO: Thank you very much, Kam.

To see a trailer for A United Kingdom, visit: https://www.youtube.com/watch?v=pX5vI4osR50