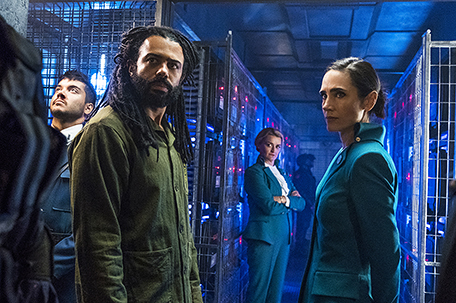 LOS ANGELES — Daveed Diggs was sorting through the many TV offers coming his way a few years ago when, as the Tony Award-winning actor puts it, “there was a lot of ‘Hamilton’ fairy dust attached to me.”

One series that caught his interest was TNT’s “Snowpiercer,” adapted from the 2013 movie of the same name by Oscar-winning “Parasite” filmmaker Bong Joon Ho. Diggs found the concept richly promising: The last people left on a frozen Earth inhabit a perpetually moving, 1,001-car train that serves as microcosm of society and its divisions.

Diggs has taken on varied projects since his Broadway success in “Hamilton,” including the 2018 film “Blindspotting,” a dark comedy he co-wrote, and Showtime’s upcoming “The Good Lord Bird,” in which he portrays former slave and activist Frederick Douglass. But “Snowpiercer” hit the sweet spot.

“I’m a sci-fi guy, and it’s more in line with the things that I consume, just not really the things that I have been in,” Diggs said. He’s serious about his love of science fiction, and quickly picks N. K. Jemisin (“The Fifth Season”) as his favorite contemporary writer in the genre.

Sci-fi and horror are “really just kind of reflections of what our concerns or fears are for any given generation. If you read them more like that, they become interesting and entertaining,” the actor-musician said.

The role he was offered in “Snowpiercer,” as the sole surviving homicide detective and a rebel leader for the working-class passengers locked in the train’s “Tail,” also gave him the chance to be an action hero. But he still hesitated.

“I was trying to be really careful about saying ‘yes’ to being a lead on a TV show that was going to take up a lot of my time. If it’s a successful show, you’re going to be there for years,” he said. But he decided that although the setting is a constrained space, “I felt like there was enough different story lines and different characters and enough intrigue. … It felt like a challenge.”

The drama series, which also stars Oscar-winning actor Jennifer Connelly (“A Beautiful Mind”), debuts 9 p.m. EDT Sunday. It has been renewed for a second season, but filming for that was interrupted by the coronavirus-caused production shutdown.

Diggs found that he enjoyed working out the choreography of fights but came away with mixed feelings during taping, recalling a scene in which he had to attack a stunt performer.

“We had to do it so many times, and there’s a real person who is my friend and I’m breaking a bottle over his head repeatedly. It’s breakaway glass, but it’s not like you don’t feel it. Then he has to fall down on the floor and hit his head on it,” he said. While Diggs didn’t cause any harm, he found delivering a beating took an “interesting toll that I did not foresee.”

“I actually much prefer shooting scenes where I get my (butt) kicked,” he said.

A chat with Corrine Bailey Rae– Corinne puts her record on and lets her hair down in her PBS special, “Live from the Artist’s Den”