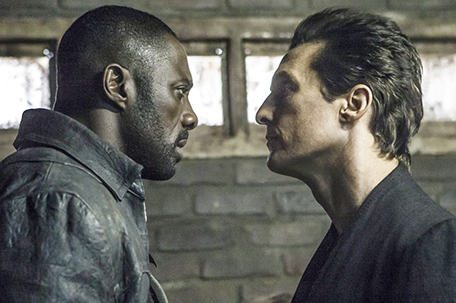 So, she takes him to a shrink who misdiagnoses the visions as delusional and has the kid committed to a mental health facility. Truth be told, Jake is indeed psychic, and has accurately forecast an impending extinction level event.

The planet’s only hope of averting an apocalypse rests on the shoulders or, more precisely, on the trigger fingers of Roland Deschain (played by Idris Elba, with his trademark gravitas). He’s the last in a long line of gunslingers from another dimension who’ve been locked in mortal conflict with forces led by Walter Padick (capably played by the terminally-suave Matthew McConaughey), an evil sorcerer on a quest for infinite power. World domination is attainable should he reach the Dark Tower, the nexus between time and space located in a parallel universe called End-World.

It’s not long before these mysterious figures from Jake’s dream begin to materialize on the streets of Manhattan. After Walter’s minions murder his mom, the boy is rescued by Roland. The two soon escape through a portal to mid-world where the epic battle to preserve life as we know it is set to unfold.

That is the engaging point of departure of “The Dark Tower”, an ambitious adaptation of Stephen King’s magnum opus of the same name. The sci-fi series was inspired by “Childe Roland to the Dark Tower Came,” a poem written by Robert Browning back in 1855. King also credits Tolkien’s “Lord of the Rings” trilogy, Clint Eastwood’s spaghetti Westerns, and the “Legend of King Arthur” as major influences.

“The Dark Tower” took a rather circuitous route to the big screen. The story was originally optioned by J.J. Abrams in 2007. Ron Howard subsequently acquired the rights in 2010. However, the picture was ultimately written and directed by Nikolaj Arcel, whose “A Royal Affair” was nominated in 2013 for an Oscar in the “Best Foreign Film” category.

This movie marks the great Dane’s first foray into English , which helps explain why he sought help with the screenplay from a trio of scriptwriters, including Oscar-winner Akiva Goldsman (for “A Beautiful Mind”). The final production’s pretty skittish, yet engaging enough to establish the franchise and leave you eagerly anticipating a sequel.

To see a trailer for The Dark Tower, visit: https://www.youtube.com/watch?v=GjwfqXTebIY

It looks like it’s official: Idris Elba will play Roland Deschain in ‘The Dark Tower’