Damien Sneed leads ‘A Tribute to Aretha Franklin: The Queen of Soul’ at Kimmel Cultural Campus 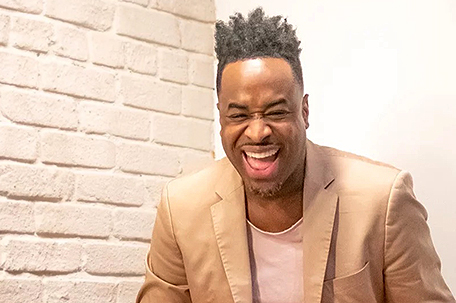 Aretha Franklin, The Queen of Soul is undoubtedly one of the greatest artists ever. She is one of the best-selling music artists of all time,… selling over 75 million records, charting 112 songs on Billboard, and earning 18 Grammys with a body of work that spans over five decades. Some of her additional accolades include being the first female artist to be inducted into the Rock and Roll Hall of Fame, being awarded the Presidential Medal of Freedom and receiving the Grammy Lifetime Achievement Award.

Artists worldwide have been paying tribute to Franklin and her immense talent for years. Damien Sneed, composer, pianist, vocalist, Grammy Award nominee and mentee of Franklin, pays homage to The Queen in “A Tribute to Aretha Franklin: The Queen of Soul.” The tribute will feature powerful voices, including music industry royalty Karen Clark Sheard, Valerie Simpson and more. Sneed spoke with The SUN about the tribute tour, which made a stop at the Kimmel Cultural Campus on March 18.

Sneed worked closely with Franklin as her organist for the last four years of her career. His final performances with her were at the Cathedral of St. John the Divine and at the Elton John’s Foundation’s 25th Anniversary Gala. He was inspired to pay tribute to the legend several years ago, and that inspiration is finally coming to fruition.

“I was supposed to teach her classical piano lessons — that’s why she originally reached out to me,” Sneed said. “Then she needed a band member and wanted me to play organ, piano and sing background, but I mainly played Hammond organ with her. The tribute came together because it was something I wanted to do after her funeral. I was talking to my publicist, who was also Aretha’s publicist. It was an idea I had even then at the ten and a half-hour  funeral.”

“I thought about Karen Clark Sheard, of course, because she is another mentor of mine, and Aretha loved her,” Sneed said “Aretha and I would talk about the Clark Sisters, Twinkie and Karen in particular, often. Then also, my other mentor(and both of them are former bosses), Karen, and Valerie Simpson, who was also a great friend of Aretha’s. Aretha recorded several of Valerie Simpson’s songs throughout her career. On her last album, she recorded “Ain’t No Mountain High Enough” and “I’m Every Woman.”

Fans of  Franklin’s work will appreciate that this particular performance will feature renditions of some of her most popular songs, including “Respect,” “Natural Woman,” “Until You Come Back To Me,” “Think,””, “Bridge Over Troubled Waters” and more. With such a diverse and dynamic body of work, selecting the songs to include in this show required a focused effort. Sneed shared his process.

“I listened to all of her projects for like a week and a half to two weeks,” he said. “The singers kept saying, ‘Please, we need to learn the lyrics,’ I said, ‘Give me two weeks.’ I listened to everything at least two or three times. The third time, I just waited to see what songs really stood out to me and resonated… and that’s how I did it.”

Paying homage to a legend comes with its own weight under normal circumstances. Those stakes are even higher when honoring a friend and mentor. Sneed shared some of his fondest last memories with the legend.

“I think the moment that I remember the most is the day that Natalie Cole died, and we were in Santa Barbara,” he recalled. “She dedicated a song to Natalie Cole, and it was just so moving — it was powerful. I also remember her final performance very well, because she was singing and playing along and then she just stopped playing, stopped singing and went completely silent. All of the band members and singers sort of knew that it was the last time.” I remember talking to her for the last time backstage. It’s more surreal now being on this tour. I feel her absence more now than I did right after she first died, especially doing the music for this show. My singers are amazing. I have several singers doing her music, but she did all this herself… all these styles and genres by herself. It’s crazy!”

Some of the other performers taking part in the show include Chenee Campbell, Markita Knight, Anitra McKinney and Alicia Peters Jordan. Sneed shared his excitement about returning to the Kimmel Cultural Campus.

“I’ve performed at the Kimmel Center once before, but it is an honor to finally do my own show at the Kimmel,” he said. “I will [host]and [introduce]every song from the piano. Everyone says that they did not know what to expect and that the show is overwhelmingly exciting. After the show, people have been coming up to me saying, ‘Why didn’t we know it was going to be like this? We should’ve invited more people. It’s amazing!”

“I want the audience to leave with a feeling of hope and understanding that music can help us to be able to live,” Sneed added. “There is so much going on in the world and we can run to music. It’s a universal language, but also music is something that gives us life… literally.”

Fans of Sneed can also look forward to his fourth opera commission with the Opera Theatre of Saint Louis, which will be a reimagined edition of Scott Joplin’s “Treemonisha,” in 2023. In the interim, be sure to visit Sneed’s website at: www.damiensneed.com for more details on upcoming performances, including the remaining dates in the 20-plus city line-up for the Aretha Franklin tribute, and to support him by purchasing his music.

Also, be sure to follow him on social media @damiensneed.